The Indian government’s decision to set in motion the carving up of a new state out of Andhra Pradesh in the south took many in the country by surprise and has stirred up a hornet’s nest.

The demand for a separate Telangana on economic grounds is six decades old and has seen its ebbs and flows. It peaked during the late 1960s when it took a violent turn and affected the education and lives of a whole generation of youth who were at the forefront of the agitation.

The prospect of a return to violence loomed large when K. Chandrasekhar Rao, the leader of the Telangana Rashtra Samiti party spearheading the current agitation for Telangana, decided to go on a fast-unto-death.

When Rao’s health deteriorated, the federal government caved in.

Saddled with the rise in Maoist violence and threats to internal security, it was all too evident that the government was not keen to open another front.

The irony is that a hunger strike has undone what a similar protest did for the creation of Andhra Pradesh way back in 1953.

The decision to draw the boundaries of Indian states on linguistic lines was taken after Potti Sreeramulu, a freedom fighter and follower of Mahatma Gandhi, died after going on a fast-unto-death for the creation of a state for Telugu-speaking people by bringing together areas split between various Indian provinces.

Like the present-day divide in the country over the creation of smaller states, the polity in the early days of independent India was also at odds over the parcelling of India on basis of language.

Opponents of the idea said that such a division would be detrimental to the country’s unity. The proponents, however, said that respecting linguistic identity would make administration easier and that diversity, in turn, would strengthen unity.

The complicated squiggles delineating states in India’s internal map are a result of the exercise to address the language quandary.

While the 28 states currently on the map have to a large extent assuaged the need for language identity, there are still demands for states based on much narrower ethnic and tribal identities.

However, much of the new demands are a result of uneven growth within states and a perception that splitting large states into smaller chunks will improve administration by bringing power centres closer to the people.

What we are now seeing is the gradual pulling away from the negativity of identity politics to a movement more focused on inclusive growth.

If and when Telangana state is finally formed, India will get to have two states speaking the same Telugu language and getting another crack at equitable development that they failed to achieve as a single, larger unit.

Similar demands by other regions in states like Uttar Pradesh, Madhya Pradesh, Bihar and West Bengal are largely driven by the economic pressure created by uneven growth and the advantages that smaller administrations offer.

The move was set in motion by the Bharatiya Janata Party (BJP) while in power between 1998 and 2004.

An avid advocate of the cause, the BJP oversaw the formation of three new states.

Uttaranchal was put together from the hilly north-western districts of Uttar Pradesh state; Jharkhand was carved out of the tribal region of Bihar state; and Chhattisgarh was parcelled out of Madhya Pradesh.

These three states were formed without much opposition as it was done in a fairly orderly fashion.

But the inconsistent way in which the Telangana issue was handled over the years by various administrations has vitiated what would otherwise have been a nuanced evolution of India’s federal structure.

The creation of smaller states would help correct an anomaly in the structure that exponentially increases the size of the electorate a politician represents when they move up the ladder of power.

This leads to the emergence of leaders who cling on to the few available offices at the top because of the enormous commercial and economic clout they can wield.

Smaller states would increase the number of political offices and reduce their strangle hold.

Statistics suggest that the three new, smaller states of Uttaranchal, Jharkhand and Chhattisgarh have done better than their parents.

Surprisingly, as regions they appear to have contributed much more to the parent states’ growth than was apparent.

Despite these positive figures favouring smaller states, detractors say only local politicians and their followers benefit from the new-found power, leaving the poor in the lurch.

Jharkhand, while registering the highest growth rate among the new states, is also a good case study of the darker side. Nine years after its formation, widening social disparities have driven many of its people to join the Maoists and its first chief minister along with other politicians have been charged with some of the worst cases of corruption.

Although the performance of smaller states has been a mixed bag so far, parties opposed to the Congress party, which leads the ruling coalition, have made their pitch for smaller states louder after the ruling party buckled on the demand for Telangana.

“The unfortunate part is that rather than fixing issues in a comprehensive and methodical manner, the politicians are making a complete mess of the situation,” said Anil Bairwal, the national coordinator for the Association of Democratic Reforms.

“They seem to be doing things only fearing violence and fast-unto-death, etc. The process of democratic consultations is not there.”

While each opposition party has its own vested interest in mind, for now their main aim seems to be the discomfiture of the Congress party.

Mayawati, the chief minister of Uttar Pradesh and a bête noire for the Congress, is ready for the further carving of her state into Harit Pradesh, Purvanchal and Bundelkhand.

“Let the Centre [federal government] give us the go-ahead. We will get the state assembly to pass the necessary resolution,” said Mayawati.

Politics aside, Uttar Pradesh is a good case for downsizing.

It is currently India’s most populous state with more than 190 million people, equivalent to the population of Brazil and more than that of Pakistan.

Its sheer mass of people also makes it the world’s most populous sub-national entity.

Uttar Pradesh is not alone in its quest to splinter, however.

The old demand for trifurcation of Indian-administered Kashmir on religious lines into Muslim Kashmir, Hindu Jammu and Buddhist Ladakh has also been amplified.

“The Telangana issue will inspire people to unite for the cause of Jammu,” said Virendra Gupta, the president of Jammu State Morcha which is spearheading the campaign.

Thupstun Chewang, the president of the Ladakh Union Territory Front, has this to say: “We were a separate kingdom till 1836. When Maharaja (Hari Singh) acceded to India in 1947, we were made part of the state. Since then, we have been demanding UT [union territory] status for Ladakh.”

“It is ironical that while we are considered a region but our status is worse than that of a district,” said Chewang.

The state government, however, has rejected both of these demands.

“J&K [Jammu and Kashmir] is a united entity and an integral part of India. There is no question of a division of the state,” said Raman Bhalla, the state minister for revenue, relief and rehabilitation.

In the country’s east, the Bodoland People’s Front (BPF) has revived its demand for a separate Bodoland to be carved out of Assam. The front is currently an ally of the ruling Congress party in the state.

“If Telangana can be carved out of Andhra Pradesh, why not a separate Bodoland in Assam? We are surely going to revive our demand for Bodoland and launch a sustained mass movement,” Hagrama Mohilary, the BPF leader, said.

The Karbis and Dimasa tribes in Assam, who have been seeking separate states, have also revived their demands.

Not to be left behind, Jaswant Singh, the former BJP leader and MP from Darjeeling, has upped the ante for Gorkhaland which is effectively his current constituency.

“The demand for a separate Gorkhaland is over 100 years old, it should be granted,” said Singh.

He was elected from Darjeeling in 2009 on a BJP ticket after the party supported the cause of Gorkhaland.

By the latest count, there are demands for the creation of at least 10 new states, including a separate Mithilanchal in Bihar, Saurashtra in Gujarat, Vidarbha in Maharashtra and Coorg in Karnataka.

The momentum gained by those demanding new states has even forced politicians opposed to the carving up of states to change their tune.

For instance, Lalu Prasad Yadav, a former federal minister and a regional leader, had opposed the creation of Jharkhand from undivided Bihar, which was the size of western Germany. He has now pitched in for the new states of Purvanchal and Bundelkhand.

Stumped by this unprecedented chorus, Pranab Mukherjee, the federal finance minister and the Congress-led coalition’s trouble-shooter, said his government is not likely to accept fresh demands for the creation of new states.

“The Telangana movement has been going on for 60 years and the home minister has already made a statement on it. But it does not mean new states are going to be created everywhere,” Mukherjee said.

While the federal government has certainly been caught off-guard, one of the options it has is to set up yet another state reorganisation commission similar to the one established in the 1950s.

While India’s internal map may not soon start looking like the pre-independence jigsaw puzzle presented by the myriad provinces and kingdoms, the world’s largest democracy could add a few more states if it takes its cue from the world’s oldest.

The 50 states the US has for its population of 310 million is almost double the number of states India has for its billion-plus people. 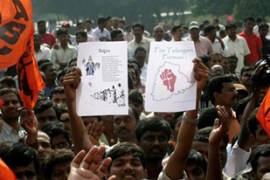 Andhra Pradesh state will be home to new state of Telangana, may include Hyderabad.