“We have reached agreement on three very important laws which have been grounds for serious disagreements between the two parties,” Pagan Amum, the SPLM secretary general, told reporters.

He was speaking after a meeting between President al-Bashir, who heads the NCP, and south Sudan’s president and SPLM leader Salva Kiir.

Amum said the laws covered the national referendum, a consultation exercise for people living in boundary areas between north and south Sudan and a referendum on whether the oil-producing region of Abyei should join the south.

NCP official Nafie Ali Nafie also confirmed a deal on those issues had been reached during the meeting.

Amum said the two sides also agreed to form a committee to discuss remaining issues, including differences over a security bill which the SPLM has argued gave too many powers to security services.

Both sides have met repeatedly over the past year to try to break a deadlock on the bills. The parties have announced breakthroughs before, but failed to end long-term wrangling over the details of the peace accord. 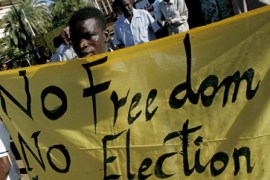 Can elections take place as scheduled without reforms to the electoral law?