In a statement posted on a government website, he said Fonseka’s allegations were “the greatest ever betrayal based on an untruth, ever made in the history of this country”.

Fonseka later appeared to try to distance himself from the Sunday Leader report, saying he had been misquoted.

Al Jazeera’s Minelle Fernandez, reporting from Colombo, said Fonseka told reporters he had been told of the order by a journalist who had been embedded with the military at the time.

Fonseka has not identified the journalist involved.

The only four-star general to have served in the Sri Lankan military, Fonseka said he was away in China when the alleged orders were given.

He said he had not been aware that the defence minister was giving direct orders to officers in the field in the final stages of battle.

Fonseka said it was not until after the war had ended that he learnt that senior Tiger rebels had used foreign mediators to organise a plan in which they would carry white flags and give themselves up.

A spokesman for the Sri Lankan military gave no comment on Fonseka’s allegations.

“This is a comment given by General Fonseka and he will come out with many more,” Brigadier Udaya Nanayakkara told the AFP news agency.

The Sri Lankan government claimed victory over the LTTE on May 18 after the army wiped out the rebel leadership in a final fierce battle.

Velupillai Prabhakaran, the group’s founder, was killed in the fighting and his body shown on national television.

Sri Lankan authorities have resisted international calls for a investigation into allegations of war crimes committed during the conflict after the United Nations alleged that more than 7,000 civilians were killed during the first four months of this year alone.

Fonseka has said he will consider ordering an investigation if he is elected president. 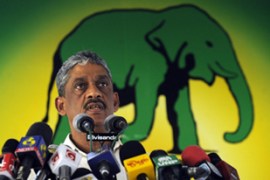 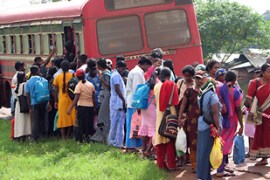 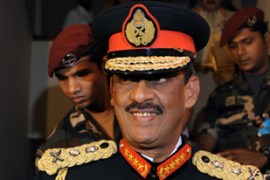 Ex-army chief announces intention to as opposition candidate for the presidency. 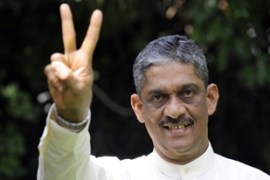 Ex-army general expected to be serious challenger to President Rajapaksa.