His comments came after diplomats from the Economic Community of West African States (Ecowas) met on Sunday in Burkina Faso to discuss a plan to return Guinea to civilian rule and halt spreading violence.

The group, which included representatives from the US, the African Union and the European Union, called for a foreign force to provide security in the country.

It also urged the installation of a transitional body to ensure that legislative and presidential elections are held in Guinea as soon as possible.

Tensions have been mounting for weeks in Guinea, stemming from a dispute between Captain Moussa Dadis Camara, Guinea’s military leader, and Aboubacar Sidiki Diakite, a former aide, over a bloody military crackdown on anti-government protesters in September.

Camara said the troops responsible for the shooting were out of his control and authorities blamed Diakite for the massacre in which witnesses said more than 150 people were killed.

On December 3, Camara was shot in the head in a failed assassination attempt at a military base in the capital, Conakry, when he tried to arrest Diakite, his head of security.

Officials in the military government have accused Diakite of being behind the shooting.

Camara is currently undergoing treatment in a Moroccan hospital.

The military leader took power after a bloodless coup in December 2008 following the death of Lansana Conte, the country’s former leader. 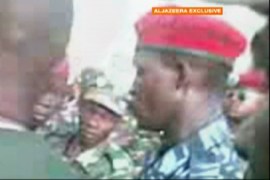 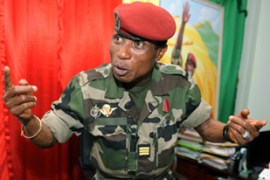 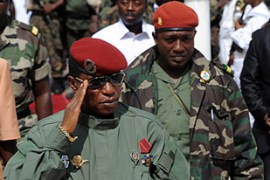