“Our debt must be stabilised before it can begin to retreat … I’ve never seen such a situation in my 29 years in parliament,” he told the Ta Nea newspaper.

Papandreou last week reassured his European partners that Greece was “not about to default on its debts”, which have soared to about $422bn.

But the prime minister has ruled out going to the International Monetary Fund for aid or freezing wages to bring the economic situation under control, talking instead of trimming Greece’s bureaucracy.

He has also vowed to go after tax evaders, not workers.

Part of the government cost-cutting drive will target the pensions system as the state seeks to avoid paying over four billion euros next year to support ailing state funds.

But for this the government will need to get the support of the influential unions. In 2008 they protested in over attempts made then to make changes to the pension system.

Adedy, the main union representing civil servants, on Monday told the government that it must clarify its policies and warned of
industrial action.

“The escalation of our strike activity will be immediate and will be declared by early February,” it said. 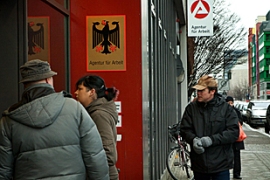