Al Jazeera’s Zeina Khodr, reporting from Diyarbakir, said: “The streets have become a battleground where people are still waiting on a decision from the DTP on whether they will formally resign from parliament.”

“Apparently no decision has been taken and reports say that the DTP are split on their next move,” she said.

Ahmet Turk, the chairman of the DTP, called on all Turkish parties to reconsider the ban which forces the Kurds out of the political sphere.

“Obstruction of democratic politics will deepen hopelessness. This is a fact. Turkey will not solve the problem by closing this party. My struggle will not end with the closure of the party,” he said.

Al Jazeera’s Khodr said that people in Diyarbakir appeared to have lost faith in the democratic process.

“While the party [DTP] hasn’t taken any decision on what they intend to do, it seems the people here have and most of them are saying that they want their MPs out of parliament and they’re opting for an armed struggle.”

The ban on the DTP undermines a government drive launched in August to expand the rights of Turkey’s estimated 12 million Kurds more rights in the hope of ending a 25-year armed campaign by the PKK. 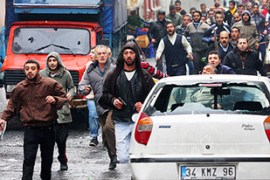