Macdonald, the former Director of Public Prosecutions, accused Blair in The Times newspaper on Monday of committing “alarming subterfuge” to mislead the British people into supporting the war.

“It is now very difficult to avoid the conclusion that Tony Blair engaged in an alarming subterfuge with his partner George Bush and went on to mislead and cajole the British people into a deadly war they had made perfectly clear they didn’t want, and on a basis that it’s increasingly hard to believe even he found truly credible,” he said.

“This was a foreign policy disgrace of epic proportions and playing footsie on Sunday morning television does nothing to repair the damage.”

Macdonald said that “Blair’s fundamental flaw was his sycophancy towards those in power … Washington turned his head and he couldn’t resist the stage or the glamour that it gave him”.

Macdonald, who works at the same law chambers as Blair’s wife, challenged the head of a public inquiry into the war “to reveal the truth without fear.”

Blair is due to give evidence to the British inquiry, led by former civil servant John Chilcot, early next year.

Reports suggesting Blair may back away from giving evidence in public were dismissed by an inquiry spokesman.

The unnamed spokesman told The Times: “Mr Blair will be appearing very much in public and will be questioned in detail on a wide range of issues.”

Macdonald has suggested that the inquiry’s performance has so far been generally unchallenging.

He said: “If Chilcot fails to reveal truth without fear in this Middle Eastern story of violence and destruction, the inquiry will be held in deserved and withering contempt.”

Blair justified the war on the basis of Iraq’s possession of weapons of mass destruction and long-range missiles and its non-compliance with UN weapons inspections, in defiance of numerous UN resolutions.

The alleged chemical and biological weapons were never found. 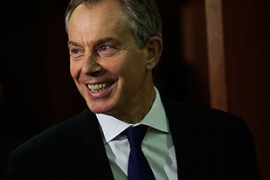 Ex-British premier defends decision to invade Iraq, despite no WMDs being found.

John Scarlett says he was not pressured to spice up intelligence report before war.