The deal to free the hostages had earlier been agreed with Perez at a local restaurant.

“All members of [the government’s] crisis committee signed a document in front of Perez where they stated that all members of the group won’t be arrested or detained,” Cane said.

The group, made up of former communist fighters and members of the Manobo tribe, raided a school in a small village in the Agusan valley region on Thursday, taking 75 hostages.

Perez has made a string of demands, including having murder charges against him dropped, in return for releasing the hostages.

He has also demanded that bodyguards of Calpito Icuag, a senior member of a rival family, be disarmed and Joel Tubay, another clan member, be arrested.

Cane assured him that Icuag’s bodyguards had already turned over their guns to the military and that a special task force was hunting Tubay, a government spokesman said.

Tubay, who has an outstanding arrest warrant for murder, is in hiding and has refused to turn himself in.

Lieutenant-Colonel Romeo Brawner, the spokesman for the Philippines armed forces, told Al Jazeera: “They have some demands but they have agreed to release the remaining hostages even without the government meeting some of their demands.”

The kidnapping is just one of a string of violent incidents to hit the Philippines in recent weeks.

Also on Sunday, 31 people, broke out of a provincial jail on the island of Basilan during a gunfight. 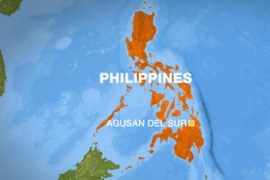