Around 50 police in riot gear moved in, forcing the protesters to the ground and bundling them into vans.

Police later followed activists as they wound through the narrow streets of central Copenhagen to the sound of drums, whistles and horns and chants of “Our climate – Not your business”.

The procession then split up, with activists fanning out to several locations, including the venue of a business conference.

Lars Borg, a Copenhagen police spokesman, said protesters did not reach the Bella Centre conference facility, where representatives from about 190 governments are negotiating a new global climate agreement.

“It has been a largely peaceful demonstration and something of a family affair really hoping to push home to the delegates here that the public won’t stand for anything less than a firm concrete commitment and agreement to cut carbon emissions and to fork out the money to help poorer nations because they are the ones who are the front line of this,” she said.

“There is still a level of confidence that there will be a political agreement by the end of the week but I don’t think that anyone inside the conference believes there will be a legally binding agreement which is what the demonstrators are calling for.

A draft climate pact unveiled at the summit on Friday revived hopes that the UN talks might be able to pin down a deal, but developing nations said they needed more financial commitment from richer nations.

With less than a week until more than 110 world leaders descend on the talks, the proposal that would at least halve global emissions by 2050 sought to bridge some of the long-standing rifts between rich and poor nations.

A European Union offer of $10.8 bn of climate aid over the next three years was welcomed by the UN and the Danish hosts.

Connie Hedegaard, the Danish minister presiding over the negotiations, said: “Things are progressing.”

China, the world’s largest carbon emitter ahead of the US, said rich nations needed to provide long-term cash if they wanted poor nations to agree long-term emissions goals.

“I doubt the sincerity of developed countries in their commitment. Why are they not talking about a commitment of providing funds through 2050?” He Yafei, the Chinese vice-foreign minister, said late on Thursday.

“That will make them credible when they are asking for an emissions reduction by 2050.”

China’s He said that was a dangerous betrayal of a globally agreed principle that rich nations had a responsibility to help poor nations adapt to a warmer world and cut emissions.

“I was shocked, personally, to read the American negotiator’s [comment],” he told a news conference.

“I don’t want to say the gentleman is ignorant, because he is very well educated, but I think he lacked common sense when he made such a comment vis-a-vis funds for China. Either lack of common sense or he is extremely irresponsible.”

“When people mention US and China together, they tend to forget that these two countries belong to totally different categories. The US is part of the developed countries … China is part of developing countries. You cannot mix the two.”

African nations said they were still considering the draft, but also were unhappy about financing.

The draft text covers both an extension of the existing UN Kyoto Protocol, whose first phase ends in 2012, and a parallel track of talks.

The text offers a range for global cuts in greenhouse gas emissions, mainly from burning fossil fuels, of at least 50 per cent by 2050 from 1990 levels. 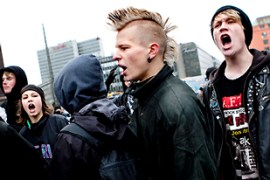 Arrests ahead of Copenhagen protest

Leaders agree to $10.6bn over three years in bid to push climate deal at Copenhagen.