Robert Mugabe, Zimbabwe’s president, has led the Zanu-PF since the 1970s but in recent years competing factions have emerged as party members vie to succeed him.

While the party has chosen Mugabe to continue as its leader for the next five years, many are concerned the succession debate could eventually split the party. 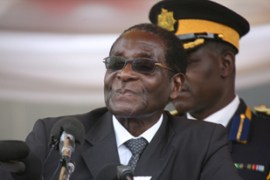 Meeting comes amid reports party is split over potential successors to Mugabe.