The court must also rule on another request by the Social Democrats to overturn the result as a whole due to what the party says was massive multiple voting and vote buying.

Mircea Marian, a political commentator at Evenimentul Zilei, a Romanian newspaper, said: “I don’t think the proportion of votes that could get validated would be in such an amount to change the election result.

“This only heightens political uncertainty. We are one step closer to chaos.”

The court challenge has prolonged a months-long crisis that began after the Social Democrats and other opposition parties brought down a Basescu-allied centre-right government in October.

The next president must name a replacement for Emil Boc, the country’s prime minister, whose government is still ruling with limited powers until it can be replaced.

The International Monetary Fund put a $2.2bn tranche of the deal, originally planned for release in December, on hold last month due to the political turmoil in the country.

Speaking from Brussels, Basescu said in a briefing following the ruling that contesting the election result was part of the democratic process.

His Democrat-Liberal allies have tried to start talks on a new cabinet, inviting Geoana’s pre-election ally, the opposition Liberals, to form a centrist coalition.

However, the Liberals said the court ruling was the key requirement to begin talks, while Geoana said his party have rejected any deal with Basescu.

The leu currency, which analysts say has been propped up by the central bank by covert intervention on the currency markets, was little changed after the court’s decision and the Bucharest stock exchange remained flat. 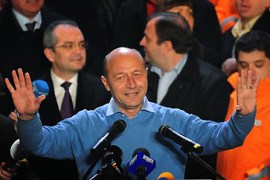 Incumbent Traian Basescu is declared winner amid claims of fraud from his challenger. 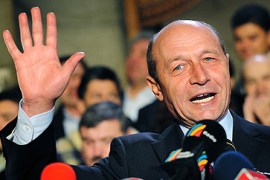 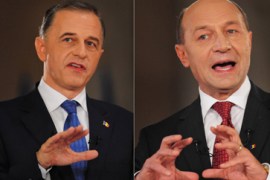 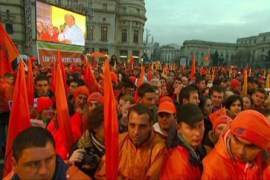