Thirugnanasampanther said that since the gates were thrown open, many people had already left.

“Transport out of the camps is a problem, but people seem to be very happy.”

The Tamils have been held in the heavily-guarded camps in Vavuniya district, 260km north of Colombo, since the government defeated the Tamil Tigers in May, ending the island’s long-running civil war.

About 128,000 men, women and children displaced by the conflict are thought to be in the camps.

An initial group of around 40,000 Tamil detainees were released from the camp in late October.

But despite Tuesday’s opening of the camps, many detainees are expected to face a difficult task returning to their home villages in areas still littered with mines and other dangerous leftovers from the war.

Thirugnanasampanther said efforts to resettle the detainees were continuing as quickly as possible, with authorities stepping up mine clearing work in the former combat zone.

International pressure has been growing on the Sri Lankan government to free the Tamil detainees from the camps.

Human rights have condemned the detention as an illegal form of collective punishment for Tamils following the government’s victory in the war.

The government however has said it needs to screen the detainees to weed out former fighters who may be hiding among them.

Gordon Weiss, UN spokesman for Sri Lanka, told Al Jazeera: “It represents a big step from six weeks ago when there was a quarter of a million people in the camps and no movement at all.

“Security concerns still remain and people are not leaving the area particularly … for a number of reasons – their homes have been destroyed or the areas have mines. So many are confined to the Buna area.

“It is a relatively short period after a 30-year war so the government is not about to lower its security posture.”

Rights groups and the United Nations have also criticised conditions in the camps, saying many detainees have been forced to live in poor, overcrowded and insanitary conditions that are breeding grounds for disease.

The Sri Lankan government has promised to close the camps by the end of January. 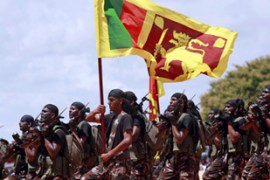 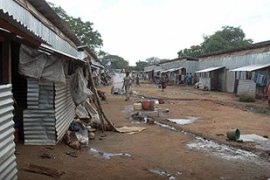 Group of 4,000 Tamils freed from detention camps as US calls for war crimes probe.