Most deposits in the closed banks are expected to be covered by the state deposit insurance fund.

The four banks, which account for 5.7 per cent of Venezuela’s banking sector, were taken over by the government on November 20, citing various violations.

Their owner, Ricardo Fernandez, a wealthy businessman who has close ties to the government, is under arrest.

Rodriguez said the government would pursue an investigation to determine who was responsible for the banks’ problems and arrest them.

“Wherever they are, they will be found and brought to justice.”

Two people have already been arrested in the affair. Ricardo Fernandez, a key investor, and Jose Camacho, his lawyer, are charged with misappropriating deposits and providing loans to other businesses in which they were investors.

Employees and customers were gathering outside closed banks on Monday after not being allowed in.

“All my money is still there. My salary, [my] savings are there,” said Deisy Avila, an employee at Canarias bank in the capital, Caracas.

Boris Segura, a senior Latin American analyst for the Royal Bank of Scotland, said
that given problems in some other banks, there could be more “cleaning up” of institutions like the four closed on Monday.

“What we might be seeing is a nationalisation of the system little-by-little,” he said.

“That could be his [Chavez’s] long-term strategy for the banks.”

The bank closures come a day after Hugo Chavez, the president, threatened to nationalise banks refusing to lend to the poor or failing to sufficiently aid Venezuela’s development.

In his weekly television show “Alo Presidente” on Sunday, Chavez said: “I’m telling the private bankers, ‘he who slips up loses’, I’ll take over the bank, whatever its size.” 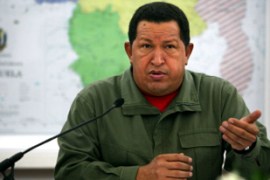 Run on bank owned by US billionaire accused of fraud prompts state action. 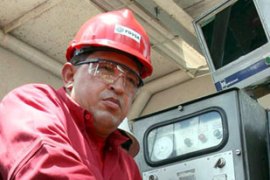