“We are using teargas on several fronts where youths are damaging stores and setting fire to garbage bins,” a police official, who requested anonymity, said.

“It’s been a year since police murdered the boy and the government which caused the murder has collapsed but nothing has changed in terms of police brutality,” Panos Garganas, a university employee, told the Reuters news agency.

Al Jazeera’s Barnaby Phillips, reporting from Athens, said: “There has been trouble during the last two or three hours very much centered around the university buildings in the centre of Athens.

“Under Greek law it is very difficult for the police to go into the university buildings and make arrests. Hardline groups were armed with many bricks, stones, Molotov cocktails and catapults, and they fought running battles with the police around these buildings.

“Meanwhile, the main march to commemorate the shooting of this 15-year-old boy, who was killed by the police last year, went through the city centre past the parliament building, and on the whole there things seemed to be peaceful.

“So, it’s been a mixed picture – there has been sporadic trouble in parts of the Greek capital but the whole march itself was varied in tone,” he said.

On Saturday, Greek police arrested more than 150 people in Athens, to head off trouble on the anniversary.

The arrests took place after hundreds of people rallied in the central district of Exarchia, where Alexis Grigoropoulos was gunned down by a police officer on December 6 last year.

In a raid in the western district of Keratsini, police detained at least 20 people.

“Five Italians and seven Greeks have been arrested, while dozens have been detained,” a police official said.

“Some were throwing stones at police and others were armed with wooden sticks.”

Greece’s government also said it will not tolerate a repeat of last year’s riots while Karolos Papoulias, the president of Greece, pleaded for calm ahead of the planned protests.

“The murder of Alexis Grigoropoulos was not only a heinous act, it was a lesson for us all … an obligation to try and ensure a fairer society for our younger generation,” he said.

Theodoros Pangalos, the Greek deputy prime minister, said: “We will not tolerate lawlessness and attacks on innocent citizens.”

Grigoropoulos was shot dead by a police officer who claimed he fired into the air whilst under attack by youths.

Two police officers have been charged with murder and attempted murder for the teenager’s death and are scheduled to stand trial on January 20.

Fears of violence have been heightened by reports that groups of anarchists from other European countries are planning to join the protests in Athens. 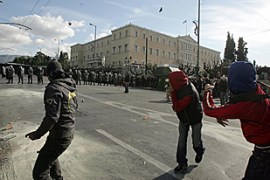 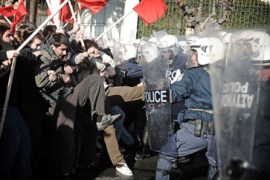