“These days some people in the middle class are saying: He is an Indian, he is indigenous but he gives us dignity. That’s why I want to tell people in the middle class ‘welcome to this revolutionary process’.” Those were the words of Evo Morales, Bolivia’s first indigenous president, in his last campaign rally before the country’s elections on Sunday.

Morales has about a 60 per cent approval rating and much of this comes from Bolivia’s long-excluded indigenous majority. But, he now wants to cement his power by appealing to the country’s middle class.

That is why middle class candidates have been included in Morales’ Movement Toward Socialism (MAS) party list.

Gabriela Montaño is one of those candidates and she says that in recent months more middle class Bolivians have started to support Morales and MAS, which could gain a two-thirds majority in congress.

“This campaign is showing that there are people from new sectors that are adding up to this process. The lists for congress and senate have people like me – a woman from the middle class,” Montaño said.

Since he took office in 2006, Morales, a close ally of Hugo Chavez, Venezuela’s president, has nationalised Bolivia’s oil and gas sector, in a move that helped to lift the country’s economy out of the red and left $8bn in reserves.

The enormous profits generated by nationalisation have funded the government’s social plans, including a new “dignity” income for the elderly.

Most poor Bolivians see in Morales somebody just like them. They say he has given them dignity after years of exclusion and discrimination.

Julio Alvarado is 70 years old and has a life of suffering written on his face. He is a Guarani Indian from the city of Tarija in the south of the country and lives right on top of Bolivia’s largest gas reserve.

However, he still lives in a shack and cooks with wood because he cannot afford to pay for liquid gas.

“I almost died the other day,” he said. “In the past we used to receive about $300 a year. Now we receive $30 every month with the ‘dignity’ income.

“The problem is that we need to travel far away to get the money so we spend half in bus tickets.”

Still, Alvarado says he will vote for Morales on Sunday because he is closer to him than any other candidate.

But critics say that Morales has wasted a unique opportunity to use the profits from nationalisation to help Bolivia move forward.

“They have put people [in charge] that are unprepared to deal with oil and gas. There have been corruption scandals and they have scared investors away,” German Antelo, a candidate from Santa Cruz in the country’s east, said.

The government recognises that mistakes have been made. But Morales says that if he is re-elected he will deepen the reforms he started when he took office and use a second five-year term to increase state control over the $30.3bn economy.

“The people know that there are two roads – [to] return to the past, to neo-liberalism, or [to] guarantee this process,” Morales said.

Politically, Morales has managed to rewrite the constitution so that it now enshrines indigenous rights but that has deepened the class divisions that have haunted the country for decades.

“With Evo Morales in power everybody has become more radical,” said Ricardo Calla, an analyst from La Paz, Bolivia’s capital.

The country is now divided between its eastern regions, which are home to many of the country’s natural resources and leading businesses, and the highlands where the majority supports the president.

Santa Cruz is the province that has challenged Morales and pushed for autonomy from the central government. But in recent months the region’s political leaders have been laying low. Morales says they were plotting to kill him.

In April, the police raided a hotel in Santa Cruz, killing three suspected mercenaries. Among them was the suspected gang leader, Bolivian Eduardo Rozsa, along with an Irishman and a Romanian. A Bolivian and a Hungarian were arrested.

The Irish and Hungarian governments have questioned Bolivia’s claim that the men had plotted to kill Morales and other public figures to create a spiral of violence that would destabilise the country.

Rozsa, who was a veteran of the Balkans war, said in an interview filmed before his death that he was going to Santa Cruz to fight for separatism.

But the opposition says that the three men were executed by the police and that no serious investigation has taken place to find out who was really behind the planned attack.

“The government invented the supposed terrorist plan to kill Morales. They executed three people. They could have arrested them but they did not. We don’t know what really happened. The government is manipulating this information to discredit us,” said Bladimir Peña, the justice secretary from Santa Cruz.

Now, Evo Morales’ main challenger comes from somewhere else. Manfred Reyes Villa is a former army captain from Cochabamba, in central Bolivia. He has the support of Santa Cruz and Bolivia’s elite.

Reyes Villa’s popularity sank when he thrust himself into national political matters and opposition to Morales. When a voter referendum was held in August 2008, he was removed as governor of Cochabamba by a vote of two to one.

But analysts say that the opposition is not strong enough, that it is divided and does not have an ideology that can compete with Morales’ vision to reform Bolivia.

“The opposition is a disaster. They still think they are in the past when the liberals offered work, houses, wellbeing. They spoke about development theories and then they did not generate anything,” says Julio Cesar Caballero, an analyst from La Paz.

Strong support among the poor and an opposition with no appeal to the indigenous majority is what will probably keep Evo Morales in the presidency for the next five years. 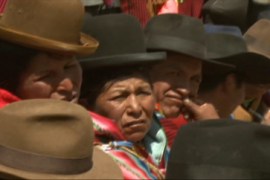 Bolivians vote in presidential election, but has Morales done enough to keep his job. 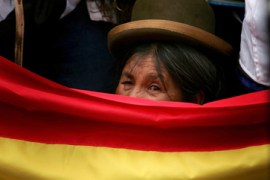 Bolivia’s president has pledged to lift the indigenous population out of poverty. 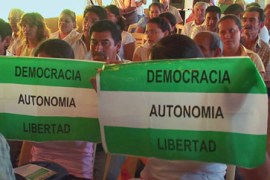 People & Power investigates the growing polarisation between the two ‘Bolivias’.