They said no bodies had been recovered and there had been no missing persons reports filed, either.

Reports remained unclear as to what caused the collision, and police said they have opened an investigation.

However, Mohammed Sharawi, the provincial governor, told Egypt’s official news agency that one of the boats capsized.

Egypt has frequent transportation accidents, mainly because of poor infrastructure.

An Egyptian appeals court in March this year found the owner of the ferry guilty of manslaughter and sentenced him to seven years in jail.

Mohamed Mansour, the transport minister, resigned in October over a train crash south of Cairo which killed 18 people. 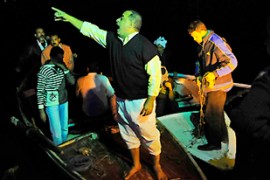 Many missing in Egypt boat accident