According to China’s state-run Xinhua news agency, Xu was found guilty of abetting three murders, while Lin was convicted of killing one person.

The case is the latest in a series of high-profile trials in an ongoing crackdown by authorities on gangs across China.

Trials in other parts of the country have exposed powerful criminal networks, often involving collusion between gangsters and officials.

Local media reports have described Lin as the suave brains behind the gang, while Xu – described as a burly, bulldog figure – provided the muscle.

Operating a chain of underground gambling dens, the duo used force and intimidation to expand into the poultry, cement and trucking industries in Yangjiang, a city known as China’s “knife and scissors capital” because of its large cutlery industry.

The case follows shortly after another high-profile gangland trial in the western city of Chongqing that resulted in death sentences being handed down to six mob bosses.

The series of cases have raised fears that burgeoning crime syndicates, some thought to be working in collusion with local police and officials, are muscling in to exploit China’s rapid economic growth. 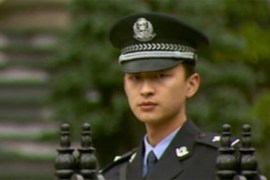 The Chinese government launches a crackdown on criminal gangs in the city of Chongqing.