Abarca was shot in the head and chest last Friday by a man on a motorcycle in the town of Chicomuselo, near the Guatemalan border.

He had long opposed Blackfire’s mining in the region, saying that the company’s activities had contaminated local rivers and caused the death of local crops and livestock.

During Thursday’s rally, protesters waved signs denouncing Blackfire and other Canadian firms with mining operations in the country.

“When we take showers we notice that we are getting stains on our skin, and so we stand up and fight and demand that these companies go away and leave our mines,” Luz Perez Torres, an activist from Chiapas, said.

Blackfire has denied the company had any involvement in Abarca’s death.

A company spokesman said Blackfire had asked the Canadian Embassy in Mexico to intervene after receiving allegations that their employees in Chiapas were being attacked and beaten in response to the killing.

In September, Abarca led residents of the township of Chicomuselo in blocking an access road to the open-pit mine where Blackfire extracts barite, a non-metallic mineral used in oil drilling projects.

The blockade was intended to press demands for three million pesos ($235,000) that residents of a nearby village say they were owed for ore taken from land outside the company’s concession area.

Chiapas state, rich in oil and gas, was opened to mining concessions about 10 years ago by the federal government.

Leases, mostly held by Canadian firms, have been challenged by residents who are concerned about environmental damage and say they have a right to the land. 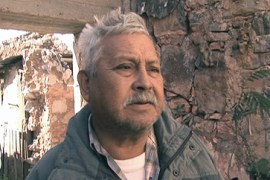 Mexicans up in arms against mine

Residents complain San Xavier mine has damaged ecology and contaminated the water.