Last week a man who said he was among the gunmen involved in the attack told Al Jazeera in an exclusive interview that Ampatuan Sr had personally ordered the killings to target a political rival.

“He ordered us to gather and kill all the members of the Mangudadatu clan,” the witness, known as “Boy”, said.

“Boy” is believed to now be in government custody and could be a key witness for the prosecution.

He is currently being held in jail and Manila and denies all the charges against him.

The killings on November 23 followed an ambush on a convoy of political campaigners and a group of accompanying journalists in a remote farming area of Maguindanao.

Police allege Ampatuan Jr and 100 of his gunmen shot dead the occupants of a convoy that included relatives of Esmael Mangudadatu, his rival for the post provincial governor in elections scheduled for next year.

Mangudadatu has said the killings were carried out to stop him from running for office.

Ampatuan Sr and Jr have had close links to the Philippine president, Gloria Arroyo, although both men were reportedly expelled from the ruling coalition last week immediately following the massacre.

However critics of the president say she knew for years about the family’s warlord reputation but kept them as allies because they delivered votes to her and the coalition, as well as helping to contain an insurgency by Muslim rebels in the south.

Members of the Amptuan family have repeatedly denied any link to the killings, saying they are being unjustly treated.

“We are being tried by publicity,” Zaldy Ampatuan, himself governor of the Autonomous Region of Muslim Mindanao, told reporters earlier this week.

“I appeal to the media, civic society, and international groups to let us give our side, and not just that of those who are politically against us. We are human too and can also feel pain.”

The charges against Ampatuan Sr come shortly after Philippine police chiefs ordered the replacement of 1,000 police officers in Maguindanao.

The pullout was intended to pave the way for an impartial investigation into the massacre after it was found that some police officers had been linked to the killings, said Leonardo Espina, spokesman of the Philippine National Police.

Espina said combat-trained law enforcement teams from other parts of the country would be sent to replace units in several towns under the control of the Ampatuan clan.

On Wednesday hundreds of soldiers were deployed outside two mansions owned by the Ampatuan clan, ordered to restrict movements of family members.

“They are not allowed to leave their mansions unless really necessary, that’s the order,” Colonel Leo Ferrer, an army brigade commander, told reporters, saying hundreds of troops with armoured vehicles were posted outside the Ampatuans’ property.

Last week’s massacre has triggered widespread condemnation both inside and outside the Philippines, with calls for the government to do more to tackle the culture of violence and lawlessness.

On Wednesday two UN senior human rights experts said the country needed major reform, urging authorities to put in place measures to prevent similar incidents in the run-up to the May elections.

Philip Alston and Frank La Rue who report to the UN Human Rights Council on extrajudicial killings and on freedom of expression said the inquiry in the incident “must be followed by effective prosecutions of all those responsible for the killings”.

“The pre-meditated killing of political opponents, combined with a massive assault on the media, must be tackled at various levels that go well beyond standard murder investigations.” 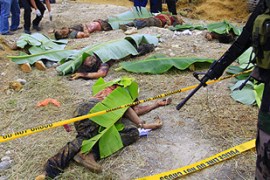 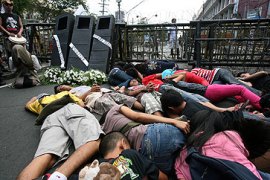 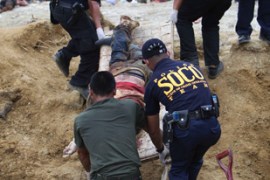 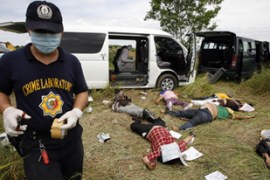