“We were treated very well. They towed us out to international waters, we dropped the sails and here we are,” he said.

Iran had warned on Tuesday the sailors would be prosecuted if it was proven they had “bad intentions”.

However, Britain said it was an innocent case of a vessel accidentally going astray into the Gulf.

Andrew Pindar, chairman of the Sail Bahrain team which owns the sailors’ yacht, said: “We are all absolutely thrilled with the news.

“It has been an extremely worrying time for all of us and particularly for the families and loved ones of those on board.”

David Young, whose son Oliver was among the five yachtsmen detained, said he was “very relieved” by the news.

“We thought it would be over quickly. This is what we were hoping for,” Young said.

Iran’s Revolutionary Guards, whose naval forces patrol Gulf waters, said the men had been interrogated and “after investigation, it became evident that their illegal entry was a mistake.”

“So they were freed after taking the needed written commitments.”

The detentions, announced by Britain on Monday, came after The Kingdom of Bahrain yacht veered into Iranian waters while travelling from Bahrain to Dubai.

Britain had earlier called in Iran’s ambassador to London on Tuesday to voice “increasing concern” over the detention of the five yachtsmen, as the sailors’ boss said a mechanical problem had likely led to their being taken into custody.

Pindar said the yacht may have drifted into Iranian waters due to a damaged propeller.

“We received a call from the crew stating that they had been stopped by an Iranian navy vessel,” he said in a statement.

“We understood that the crew believed they were in UAE waters, but due to a fault with the propeller, they may have inadvertently drifted into Iranian waters.”

The sailors were believed to have been intercepted near the Iranian-controlled island of Abu Musa, whose ownership is disputed by Iran and the United Arab Emirates. 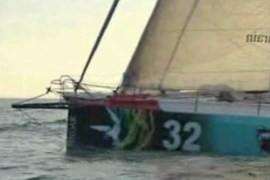