Theodore Karasik, an analyst at the Institute for Near East and Gulf Military Analysis, said that it was likely that the apparent success of the Saudi action was only a “temporary reprieve”.

“The Saudis have been able to push back the rebels but they are going to continue to have problems with the rebels if the Yemeni army is indeed using the southern part of Saudi Arabia for operations and for supply lines,” he told Al Jazeera from Dubai.

“This draws them closer together, but from the point of view of the rebels, and also from al-Qaeda, it means they become apostates and they will go after them more.”

Prince Khaled was reported as saying that three members of the Saudi security forces had been killed and 15 wounded in the fighting along the Saudi-Yemeni border.

He also acknowledged that four Saudi soldiers were missing following the five days of fighting, but dismissed claims that anyone had been captured.

Mohammed Abdel-Salam, a spokesman for the Houthis, told Al Jazeera on Friday that the men were seized after Saudi ground forces crossed into Yemeni territory.

The group has tried to prove that Saudi troops had crossed over the border by releasing video footage purportedly showing the Saudi military in Yemeni territory.

But Prince Khaled said that Saudi Arabia “has not, and will not interfere inside Yemeni borders”.

Hussein Shobokshi, a columnist for Asharq Al Awsat newspaper in Saudi Arabia, said that the conflict along the border has been escalating for some time.

“The Saudis had to take a stand, had to take a very aggressive stand, since the Houthi aggression is not a very benign one, it is not a Yemeni one any more.”

Ali Abdullah Saleh, the Yemeni president, said that the military would not ease the offensive against the Houthis “until we bring this tyrannical, traitorous and mercenary group to an end”.

“The war just started two days ago, and what has been happening in the past six years was just … training for the army units,” he said.

“The war will never stop no matter how much money or martyrs it costs.”

Khalid al-Dakhil, a political analyst at the King Saud University, said that it was impossible for Riyadh to ignore the conflict between the Houthis and the Yemeni government.

“The Houthis seem to be very determined in pinning down the Yemeni army, and the Saudi government cannot afford to just sit by and watch what is happening. They have to support the Yemeni government”, he told Al Jazeera.

Hundreds of people have died in northern Yemen since the country’s army began an offensive against the Houthis on August 11.

The fighters, concentrated mainly in the Saada and Amran provinces, are known as Houthis after their late leader, Hussein Badr Eddin al-Houthi, a Zaidi leader who was killed by the Yemeni army in September 2004.

The Houthis, now led by Abdul-Malik al-Houthi, Hussein’s brother, insist they are fighting to defend their community against government aggression and marginalisation. 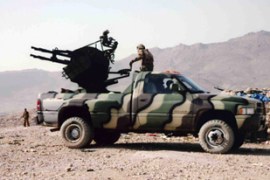