International leaders and the UN have acknowledged Karzai’s victory in the polls, but they have issued stiff warnings that corruption must be tackled in order to ensure continuing support.

“Among diplomatic circles there seems to be some very undiplomatic language right now,” he said.

“The response [from diplomatic missions] is that they are very surprised by this language … one high-level official pointed out that much of the Afghan government is being paid by the international community and there are international troops out there fighting to keep this government in power.”

Karzai was only returned for a second term after Abdullah Abdullah, his main rival, withdrew from a planned second round runoff when his demands for major changes to the heavily criticised election commission were dismissed.

After the Security Council held a closed-door session on Afghanistan on Friday, Ban Ki-moon, the UN secretary-general, cautioned that the political situation in the country remained “delicate”.

“Clearly, the recent elections were seriously flawed,” he said.

Gordon Brown, the UK prime minister, said that the government had become a “byword for corruption” and challenged Karzai to meet the five key tests of security, good governance, reconciliation, economic development and regional relations.

The Afghan foreign ministry was particularly angry about comments made by Kai Eide, the head of the UN mission in Afghanistan, who it said “exceeded international norms and his authority as a representative of an impartial organisation”.

Eide said on Thursday that the government should not assume that it would keep the backing of international donors and troops if it does not address the widespread perception of corruption and continues to welcome regional commanders into the administration.

“We can’t afford any longer a situation where warlords and power brokers play their own games,” Eide said.

“We have to have a political landscape here that draws the country in the same direction, which is in the direction of significant reform.”

Aleem Siddique, the UN spokesman in Kabul, told Al Jazeera that Eide would not apologise for his remarks.

“We need to see firm concerted action to tackle these issues if we are to move forward.”

In a speech after he was declared the winner of the presidential election, Karzai pledged to combat corruption and work with his former opponents to ensure all Afghans views are taken into account.

Commenting on the speech, David Miliband, Britain’s foreign minister, told Al Jazeera: “He spoke very clearly about national unity, tackling corruption, building up security forces of his own, not relying on foreign, about reaching out to his neighbours, notably Pakistan, and also about bringing the insurgency back into the political system.

“He said many things that people wanted to hear from him. Now we need to see them in practice.” 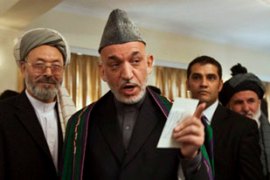