Australia has launched a probe into a major oil spill off its northwestern coast caused by a leaking well which dumped millions of litres of crude into the sea for over two months.

“I simply say that we aspire to learn from this incident and take any necessary steps to stop similar incidents occurring in the future,” Ferguson said on Thursday.

The government probe will focus on the case of the leak, the response by the Thai-based rig operator PTTEP Australasia and other officials, and the impact of the oil spill on the environment.

It will have the power to call witnesses, take sworn evidence and force companies to hand over documents, and will make recommendations aimed at stopping future accidents.

Borthwick’s report is due in April.

PTTEP Australasia, a unit of Thailand’s PTT Exploration & Production Plc, said
it does not know what sparked the blaze, but warned that the site off northern Australia may need environmental monitoring for up to seven years.

PTTEP in a statement on Thursday said it would co-operate with the inquiry.

“The company welcomes the opportunity for all the facts to be placed on the public record and fully assessed,” the company said.

Thousands of barrels of oil poured out from a damaged well into the sea between Australia and Indonesia after the West Atlas rig began leaking on August 21, prompting several attempts to cap it by boring a relief well and pumping in heavy mud.

A fire broke out at the rig and Montara wellhead platform as workers were pouring mud into the leaking hole.

Officials finally managed to plug the leak and extinguish the fire on Tuesday.

The oil slick from the rig, about 250km off Australia’s northwest coast, now stretches across thousands of kilometres of remote ocean.

Environmental groups have criticised the government’s handling of the spill, saying it threatened bird and marine life off Western Australia’s north coast. 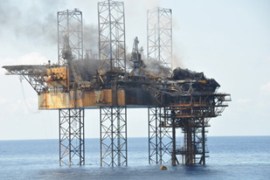 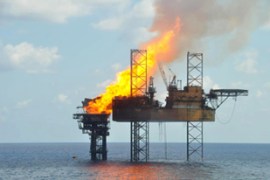 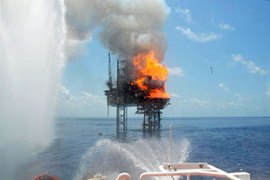 Timor rig at risk of collapse

Environmentalists say blaze on leaking oil rig off Australia is a “catastrophe”.