Sunday’s vote has been widely criticised for irregularities, with claims that election observers were given scant access and that foreign media were barred from covering the election.

Pro-democracy groups have also complained about the lack of media time given to rivals.

“In recent weeks it [the government] has stifled and harassed the country’s beleaguered political opposition … [and] imposed serious constraints on international observers,” New York-based Human Rights Watch (HRW) said in a statement.

Critics have accused Obiang, who has ruled Equatorial Guinea since 1979, of attacking and harassing opposition politicians, and having the election organised by his own ministers.

Western governments are also accused of ignoring widespread rights abuses and repression, in favour of dealings in the West African nation’s oil and gas reserves.

“We feel isolated and disappointed because we are doing what little we can while those who have interests in this country should be putting pressure on this regime,” Mansogo Alo said.

“Countries like the United States and the European Union have the power to intervene with this dictatorship.”

Equatorial Guinea is the third largest producer of oil in sub-Saharan Africa, aiding the country’s annual per capita income rise to $31,000, the highest in the region.

US firm Exxon Mobile first discovered oil in the country in 1994, and US companies continue to dominate the market there.

Speaking to Al Jazeera ahead of Sunday’s vote, Obiang rejected claims of corruption and said his government was committed to holding free and fair elections.

“I ask myself, where is this corruption, how is it found, where is it discovered?” he said.

“I don’t have knowledge of that. There is none whatsoever.” 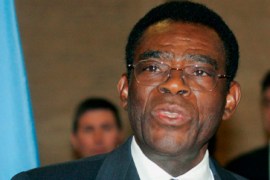 President Obiang tells Al Jazeera his leadership is unchallenged ahead of election.