“We are prepared for a long war,” Azam Tariq, a spokesman, was quoted by the Associated Press as saying.

“The areas we are withdrawing from, and the ones the army is claiming to have won, are being vacated by us as part of a strategy. The strategy is to let the army get in a trap, and then fight a long war.”

Tariq also denied army claims that hundreds of fighters have been killed in the military’s campaign.

He said that only 11 had died so far.

Earlier, the army said that 21 fighters and a soldier had been killed during the previous 24 hours in South Waziristan.

There is no independent verification of the casualties as reporters are not allowed into the war zone.

Pakistan has effectively sealed off the tribal areas, semi-autonomous regions of the country where the central government in Islamabad has only minimal authority.

The army launched its offensive on Pakistani Taliban bases in South Waziristan on October 17.

The region’s rugged, mountainous landscape is said to have become a global centre for the Taliban and al-Qaeda.

As the military press forward with their campaign, the fighters have hit back with a series of bomb attacks across Pakistan.

At least 35 people were killed in a blast in the city of Rawalpindi on Monday as the government announced a reward for the capture, dead or alive, of several Taliban leaders.

An opinion poll released on Tuesday showed a majority of Pakistanis supported the offensive in South Waziristan, although more blamed the US for the violence in their country than blamed the Taliban.

The Pakistani offensive is being closely watched by the US and other powers embroiled in the conflict in neighbouring Afghanistan. 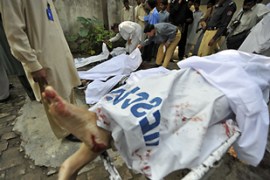 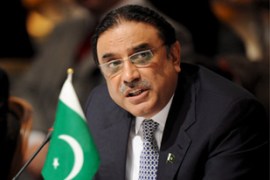 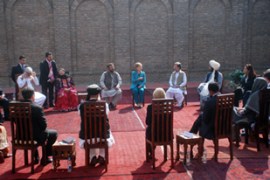 US secretary of state says it was important to speak about failure to hunt down al-Qaeda.