Polling stations have opened for the presidential election in Honduras, five months after a military coup removed Manuel Zelaya from power, plunging the country into a political crisis.

The interim government said it will ensure security for the elections at all costs, saying that the new ballot will end the leadership stand-off.

But Zelaya, who is unable to vote and still inside the Brazilian embassy in Tegucigalpa where he has been for the past 10 weeks, has been urging supporters to boycott the vote, saying that it will only legitimise the coup.

Lucia Newman, Al Jazeera’s Latin America editor, said that about one-third of voters are expected to stay away from the polls either to protest Zelaya’s ouster or for fear of violence.

More than 5,000 polling stations, including six in the United States for the about one million Honduran immigrants there, opened at 7am (13:00GMT) on Sunday.

Tensions were high in Honduras as heavily-armed soldiers escorted elections materials to schools and other voting centres on Saturday.

Rodolfo Pastor, the Honduran culture minister under Zelaya, told Al Jazeera that there was a “climate of terror” in Honduras for what he described as “militarised elections”.

“I don’t think you can ignore that fact that hundreds of candidates have resigned their posts on the ballots, denounced the elections and have said they will not participate,” he said from Boston in the United States.

Some countries in the region, including Brazil and Venezuela, have thrown their support behind Zelaya’s boycott, but the US and Costa Rica have said that they will endorse the result of the elections.

The US state department said Sunday’s election was a critical step towards restoring democracy in Honduras.

The two leading candidates said that they were hopeful that the elections will be recognised internationally.

Lobo, a conservative candidate who has a clear lead over his closest rival in recent polls, said the elections were legal and constitutional.

“Even though many countries have said no [that they will not recognise the elections], I have personally spoken to them and they have told me ‘don’t worry, we’ll recognise them, just give us some time’,” he said.

“This will normalise, because in a democracy, to not recognise an electoral process, would be a bit strange.”

Lobo has said that if he wins, he will plead with foreign leaders to restore funding and seek a new agreement with the International Monetary Fund.

Honduras has been shut out by foreign donors since the June 28 coup.

Santos said the fate of Zelaya would be determined by the law following the elections, saying that justice and the coup “will depend on the institutions and the law”.

“I’m a candidate, I don’t represent the state or the government, I’m a candidate who aspires to govern,” he said on the eve of the election.

“I plan to do this as a pact to integrate civil society and define a future that we will build together.” 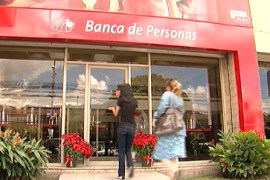 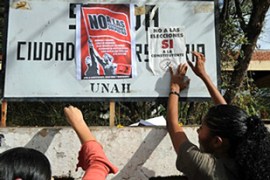