“We do not understand why Norwegian officials … are seeking to justify people’s negligence and refusal to pay tax on assets, and are casting doubt on countries’ legal mechanisms,” he said.

But Ebadi, a strong critic of President Mahmoud Ahmadinejad’s government, dismissed this explanation.

“The Iranian authorities are not telling the truth because according to our tax laws, there is no tax payable on the Nobel Prize,” she said.

“My husband also had a deposit box in the bank and in that was my Nobel Prize and the medal of the Legion d’Honneur.”

Speaking through a translator, she said: “The Nobel Prize was in the deposit box in Tejarat bank and they seized that deposit box.”

Norway, which summoned Iran’s charge d’affaires in protest at the incident, said Ebadi’s husband had been arrested in Tehran and severely beaten.

Jonas Gahr Stoere, Norway’s foreign minister, said: “This is the first time a Nobel Peace Prize has been confiscated by national authorities.

“Such an act leaves us feeling shock and disbelief.”

Six years ago, Ebadi became the first Muslim woman and the first Iranian to win the peace prize, which was awarded for her work in promoting democracy and human rights. The award included a cheque for $1.45 million.

Ebadi was out of the country during the disputed re-election of Mahmoud Ahmadinejad, the Iranian president, in June.

She has spent the past five months touring the world in a bid to draw attention to the government’s alleged electoral fraud and suppression of the opposition.

“I am effectively in exile,” she said recently.

Many of Ebadi’s collaborators and her husband have been arrested in the past months.

Her human rights centre was closed by authorities a year ago.

Speaking to Al Jazeera on the issue, Geir Lundestad, director of the Norwegian Nobel Committee, said: “The underlying problem, of course, is the constant harassment of Shirin Ebadi, her family and even friends of the family, which has made it impossible for her to return to the country.

“It is an undeniable fact that her husband was brought in and even whipped in incarceration.

“Iranian authorities should give back the medal and diploma, and make it possible for her to return to the country so can continue her work under normal circumstances. She has done nothing wrong and they should respect her basic rights.”

Lundestad said that after the election, “extensive measures have been taken against any form of opposition or dissidents, and the number of political executions has apparently increased substantially.

“But we feel we have to speak up for the rights of the Nobel laureate”. 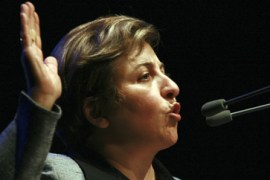 Iranian human rights lawyer and 2003 Nobel Peace Prize winner Shirin Ebadi has warned that her client, jailed journalist Akbar Ganji, is in failing health and complained she had not been allowed to visit him. 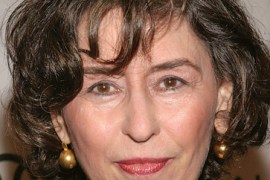 Novelist Azar Nafisi talks to Al Jazeera about the election.