But on Thursday, the Honduran Supreme Court recommended the Congress to vote against restoring Zelaya – as he faces several criminal charges, including treason.

Cristina Fernandez de Kirchner, the president of Argentina, said last week she would not recognise the result of the presidential election.

The United States, however, is one of the few countries likely to welcome the ballot.

“The United States … will watch the Honduran elections with great interest on November 29 and will determine after that time, in consultation with election observers, whether they were free, fair, and transparent,” a US State Department message said.

But the United Nations and the Organisation of American States regional bloc have declined to send election monitors.

So far, Cuban exiles in Miami and right-wing US political groups have been among the few to say they will send observers.

Neither Zelaya or Roberto Micheletti, who took charge when Zelaya was sent into exile, will stand in Sunday’s election.

Porfirio “Pepe” Lobo of the conservative opposition National Party, who lost the 2005 election to Zelaya, has emerged as the front runner in the election.

Elvin Santos, the Liberal Party candidate and once Zelaya’s vice-president, said the pledge was important to avoid the possibility of another political crisis over the issue of presidential term limits.

“The tone and legality that a plan for the country needs and which a congress can give it, so that no president tries to invent a reason to stay. That’s the most important thing we are doing,” Santos said.

As preparations for the elections went ahead, student organisations blocked the entrance to the capital’s main university, which was due to be used as a polling station.

“It’s a protest against the elections because we consider them to be illegal,” said Francisco Portillo, a student organiser.

In the border town of Danli, supporters of Zelaya said many followers of the ousted president had been arrested by the police and military.

“All of us with Mel Zelaya, they are going to arrest us all. We can’t even go out because they have all of us on a list”, Juana Francisco Obando, a Zelaya supporter from Jutiapa, said.

Rights group Amnesty International said they could not confirm the reports. 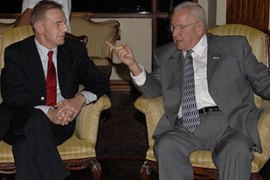 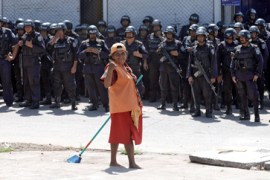