Schneiderhan “released himself from his duties at his own request”, zu Guttenberg told parliament.

Germany’s Bild newspaper reported on Thursday that videos and a secret military report had clearly pointed to civilian casualties at the time when the government and military was denying civilians had been killed.

A German colonel called in the Nato air raid against two tankers that had been seized by Taliban fighters near Kunduz, fearing they could be used to attack troops.

In the days after the Afghan strike, Franz Josef Jung, who was defence minister at the time and now serves as labour minister in the new centre-right government, denied there were any civilian victims.

Zu Guttenberg said that Jung had not seen the videos, and that he himself had only been shown them on Wednesday.

Angela Merkel, the German Chancellor, said she backed Guttenberg in his efforts to “take the necessary steps” to clear up the matter.

Speaking at a news conference with Anders Fogh Rasmussen, the Nato secretary-general, Merkel said she expected Jung to be open about what he knew about the incident.

“I have full confidence that [Jung] will act in the same spirit, namely that responsibility in Afghanistan means full transparency,” she said.

The resignations came as parliament was debating extending the mandate for the 4,500-strong German mission in Afghanistan.

A report by the Nato military alliance said the air raid killed between 30 and 40 civilians, as well as a number of fighters.

But David Chater, Al Jazeera’s correspondent in Kabul, said: “The Afghan government says the number of people killed in the incident was 69 Taliban fighters and 30 civilians, but more independent reports put the number of civilians killed as nearer 70, other reports as high as 100.

“A German commander … ordered the airstrike and two F-16 American jet fighters came in and dropped bomb straight onto the tankers.

“Now the problem is of course, they didn’t do a warning run first as they should have done under the new rules imposed by General Stanley McChrystal [the senior US an Nato military commander in Afghanistan] which were there to save civilian lives.”

Assadullah Omar Khil, an elder of the Omar Khil tribe in Kunduz, told the AFP news agency on Thursday that at least 100 of his tribe were killed in the air raid, but he welcomed the resignation as “a good step”.

“He showed his sense of humanity and proved he did not want to kill Afghan civilians,” he told the AFP news agency.

“No more than eight Talibans were killed, on the account of eight guns found in the area.

“We pray God for the government and foreign forces to focus on civilians casualties to avoid them in the future.” 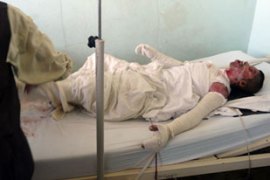 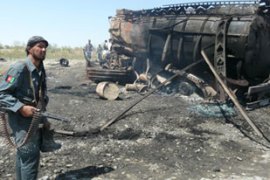 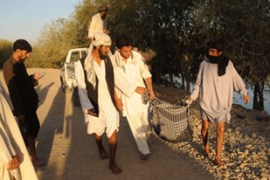 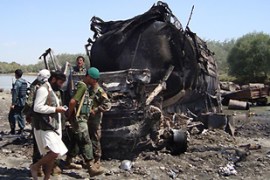