“Initial findings identified a Secret Service checkpoint which did not follow proper procedures to ensure that the two individuals named in a Washington Post story were on the invited guest list,” Edwin Donovan, Special Agent in Charge, said.

He emphasised that the couple “went through magnetometers and other levels of security, as did all guests attending the dinner.”

The Washington Post, which broke the story, described the couple as aspiring
reality TV stars and polo-playing socialites from northern Virginia.

John Terret, Al Jazeera’s correspondent in Washington, said: “It turns out that they are contenders for a reality TV programme ‘Real Housewives of DC’, I think what they were doing was a stunt designed to impress the producers.

“They had their photographs taken with vice-president Biden, with Rahm Emanuel, who is the White House chief of staff, and a number of other celebrities.

“We think they went for cocktails in the East Room. But before they could sit down to dinner, where all the 350 specially-invited guests would have their names written above their plates, the couple just slipped away.”

According to The Washington Post, the uninvited guests were in the same room as the Obamas and Singh, but it is not known if they met.

The paper said the couple could face a potential trespassing charge unless someone from inside the White House staff slipped them in. 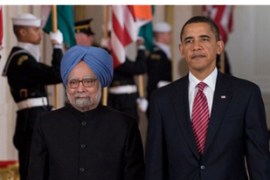 US and India commit to nuclear deal