Addressing a joint news conference in the Venezuelan capital, Chavez said: “We know what the state of Israel stands for, a murderous arm of the Yankee empire.

“What the president of Israel said, we take as a threat.”

Chavez broke relations with Israel earlier this year following its offensive in the Gaza Strip which he branded as genocide.

Referring to Chavez and Ahmadinejad, during a forum in Argentina earlier this month, Peres said: “They won’t hold, not because any of us is going to kill them; their own people are getting tired of them.

“So if you want good relations with them, consider that they are passing passengers. It’s a short-term relationship. So don’t waste too much on them.”

Peres’ tour of South America was viewed as an attempt to counter growing Iranian influence in the region in advance of Ahmadinejad’s visit.

Ties between Venezuela and Iran, who are both members of the Organisation of the Petroleum Exporting Countries, have grown close in recent years.

Karen Hooper, South America analyst for Stratfor consultancy, said that the worst fears in Washington about Venezuela-Iran’s ties may be overblown.

“There is little danger of Venezuela being able to help Iran proliferate,” she said.

“Although Iran is short on uranium and Venezuela might have some, even if Venezuela were to deliver sufficient quantities, the real problem for Iran is the enrichment process, which requires technology that Venezuela could not possibly wield.”

The two leaders signed a number of business and industrial agreements during Ahmadinejad’s vist relating to 129 joint projects.

Chavez said they ranged from assembling bicycles and producing car-parts, to processing milk and building houses.

But Teodoro Petkoff, a leading Chavez critic and newspaper director, mocked Ahmadinejad’s visit, saying past co-operation deals had led to little of substance, not even the planned production of bicycles.

Ahmadinejad’s trips to left-leaning Brazil, Bolivia and Venezuela this week have helped cement ties with countries that back Iran’s right to develop atomic power for peaceful purposes.

Iran is under pressure to accept a UN plan aimed at checking nuclear ambitions which it says are peaceful but the West fears could be intended to create atomic weapons.

“What do the imperialists say? That Ahmadinejad is here because we are making the atomic bomb here too,” Chavez said.

“They’re the ones with the atomic bombs, and remember the Yankee imperialists dropped bombs on Hiroshima and Nagasaki.” 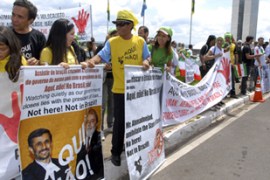