In the main northern city of Mosul, a church and a convent were bombed, with both targets severely damaged but without any casualties, religious leaders said on Thursday.

One of the attacks hit the Saint Theresa Convent of Dominican nuns in the western Jadida (New Mosul) district, Father Yousif Thomas Mirkis, the chief representative of the Dominican order in Iraq, said.

“These attacks are aimed at forcing Christians to leave the country,” he told the AFP news agency, noting that the bomb had been placed inside the convent grounds and caused damage to the building.

“We cannot pray there,” he said, referring to the damage. “There were no casualties because it was a working day.”

Last year, thousands of Christians fled Mosul in the face of violence that claimed the lives of 40 people from the community.

Since the US-led invasion, hundreds of Christians have been killed and several churches attacked.

A report this month by Human Rights Watch said minority groups in the north of the country, including Christians, have fallen victim to a struggle between Arabs and Kurds for control of several disputed districts.

Although violence nationwide has dropped dramatically compared to 18 months ago, attacks remain common in Mosul and in Baghdad.

A total of 410 people, including 343 civilians, were killed in violence last month.

The tenth day of Dhul-Hijjah is Eid al-Adha (the Feast of Sacrifice) in which Muslims slaughter a sheep, goat, or camel marking the end of annual Hajj pilgrimage to show their gratitude for Allah’s generosity and blessing. 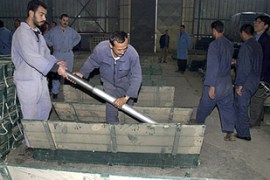 US sought ‘smoking gun’ in Iraq