HRW also called for the about 11,000 LTTE suspects being already held in government centres to be either charged or released.

“The government has been holding many Tamils for alleged involvement in the LTTE without providing them basic rights due under Sri Lankan and international law.

“The release of displaced persons should not be an excuse for another wave of arbitrary detentions.”

Colombo announced last week that those in internally displaced camps would be allowed to leave by December 1. However, some people have since been told that they will be transferred to the Manik Farm centre in the north of the island nation.

Colombo did not immediately respond to the comments. It has previously said that LTTE fighters are being rehabilitated at the centres.

The government put displaced Tamils into camps following their military victory in May.

The LTTE had been battling the government for a separate ethnic-minority Tamil homeland in the northeast. More than 70,000 people died in the conflict. 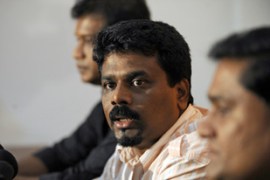