New HIV infections declined by nearly 25 per cent in East Asia and 10 per cent in south and southeast Asia within the same time frame.

Michel Sidibe, the executive director of UNaids, applauded current HIV prevention programmes but he said more needed to be done.

“The findings also show that prevention programming is often off the mark and that if we do a better job of getting resources and programmes to where they will make most impact, quicker progress can be made and more lives saved,” he said.

The data was contained in the 2009 Aids epidemic update, which revealed that HIV still played a significant factor in deaths to women during childbirth.

Using South African data, about 50,000 maternal deaths were associated with HIV in 2008.

“Aids isolation must end … half of all maternal deaths in Botswana and South Africa are due to HIV,” Sidibe said.

The report also indicated some change in the way Aids has spread around the world.

HIV transmission in Asia in the past was mainly through prostitution and intravenous drug use, but now, it is increasingly affecting heterosexual couples.

While it was confined mainly to injecting drug users in the past in Eastern Europe and Central Asia, the disease is now spreading to sex partners of people who inject drugs. 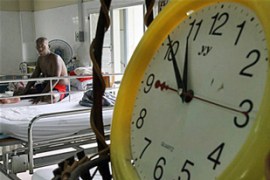 Drug combination prevents infection in more than 30 per cent of cases, researchers say.