The JVP previously backed Rajapakse, but it, as well as the main opposition United National Party, have since said they will support any move to oust the president.

Rajapakse earlier called the snap election, which is due between January 11 and February 13. Local media said that the poll may take place on January 23.

The president hopes to benefit from the government’s popularity following the end of its military campaign against the Tamil Tigers, who had fought for decades for a separate state in Sri Lanka’s north.

Fonseka resigned as chief of defence staff earlier in November, following a rift with Rajapakse over who should take credit for the Tiger’s defeat.

The government’s offensive against the Tigers culminated in May, ending a conflict that began in 1983 and which killed more than 70,000 people.

Rajapakse has also been accused of corruption and of granting key state positions to family members, positions that would be repealed should Fonseka win the election.

Gotabhaya Rajapakse, his younger brother, is the defence secretary, who also played a key role in crushing the Tamil Tigers. 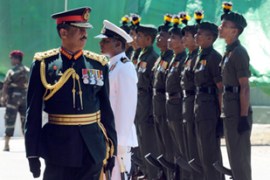