Duch has been charged with crimes against humanity, war crimes, torture and premeditated murder, and faces a maximum term of life in prison.

The tribunal does not have the power to impose the death penalty.

A verdict is expected early next year.

“It does not matter that others may not admit their guilt or fail to cooperate with authorities,” prosecutor Chea Leang told the court.

“It is simply inconceivable that anything other than a lengthy sentence of imprisonment should be imposed on him.”

She said Duch held a unique, central role in the Khmer Rouge security apparatus and called on judges to reject defence suggestions he was a scapegoat for a regime which had a network of some 200 prisons across Cambodia.

Up to two million people died during the Khmer Rouge’s four years in power, wiping out nearly a quarter of Cambodia’s population through starvation, overwork and execution.

Since proceedings began in February, Duch, 67, has repeatedly asked for forgiveness, and also argued that he was not a leading figure in the regime saying that he acted out of fear for his own safety and that of his family.

Duch has been detained since 1999, when he was found working as a Christian aid worker in jungles of Cambodia.

The UN-backed court was established in 2006 to try leading members of the regime on charges of war crimes and crimes against humanity.

The Duch case is its first trial.

But the tribunal has faced controversy over allegations of interference by the government and claims that Cambodian staff paid bribes for their positions at the court.

The joint trial of four other more senior Khmer Rouge leaders is expected to start in sometime after the verdict in the Duch case is handed down in the new year.

The court is also investigating whether to press charges against five other former Khmer Rouge cadres amid a dispute between international and Cambodian co-prosecutors over whether to pursue more suspects. 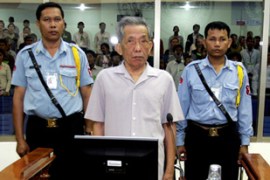 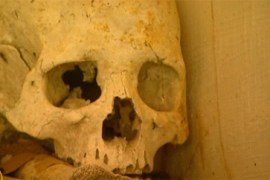