Earlier, the Palestinian Islamic Jihad movement and the Popular Front for the Liberation of Palestine (PFLP) both denied they were party to a ceasefire.

Khalid al-Batch, a leading figure in the Islamic Jihad movement, said that no agreement had been reached and warned of an Israeli military escalation.

A statement from the PFLP armed wing, the Abu Ali Mustafa Brigades, said: “We affirm that we were not part of any agreement on stopping the firing of rockets at Israel or to neutralise any form of legitimate resistance as granted by all international codes and conventions.”

The denials are a blow to Hamas, which had announced the ceasefire on Saturday, saying the move was aimed at preventing retaliatory attacks by Israel and to allow Gazans to rebuild their homes, destroyed during Israel’s three-week war on Gaza launched at the end of last year.

The Hamas statement had noted that Palestinian groups would respond to attacks by Israel.

The raids came after a rocket was fired into Israel from Gaza. The rocket landed without causing casualties.

There has been a significant reduction in the number of Palestinian rocket attacks and Israeli air raids since both sides declared unilateral ceasefires following the conflict. 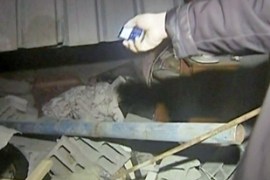