Hundreds of Brazilians have protested against a visit by the Iranian president.

Mahmoud Ahmadinejad’s South American tour – which will include more traditional allies Venezuela and Bolivia – is aimed at strengthening economic and political ties with the region.

Sunday’s protests in Rio de Janeiro over Monday’s visit were organised by a variety of groups, including those against racism and those representing African-Brazilian artists and gays who demonstrated against Ahmadinejad’s declarations against homosexuals.

Holocaust survivors and other pro-Israeli groups protested against Ahmadinejad’s controversial comments on Israel and the Holocaust, as well as his country’s nuclear activities.

One demonstrator, Erlix Esteves, 40, a member of the Am Israel group, said: “Brazil stands for diversity, peace, tolerance and coexistence among different peoples. – Ahmadinejad’s visit goes against what Brazil is about.”

Israel has said Brazil’s hosting of the Iranian president is a “mistake”.

But Luiz Inacio Lula da Silva, the Brazilian president who invited Ahmadinejad and is set to meet him for talks, called it “an honour” to receive him.

Ahmadinejad, who will be the first Iranian president to visit Brazil, last week issued a statement defending closer ties with Brazil, and hinted at closer bilateral ties on a number of areas, including nuclear co-operation. 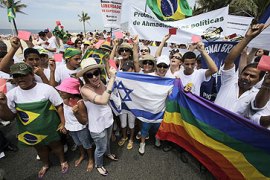 The dollars, cents, reais and rials of the relationship.