“China is changing the way that espionage is being done,” Carolyn Bartholomew, the commission’s chair, said.

While the attacks came from around the world, the commission said China was the largest culprit.

Some Chinese “patriotic hackers” may not receive official support, but the report said the government may deploy them in a conflict to disrupt a foreign adversary’s computers.

The bipartisan commission found that China was the most aggressive nation in spying on the US and was trying to recruit more American spies.

Authorities in Beijing rejected the report, calling its a “fabrication”.

“The commission has always played up China threat. It has arisen out of a ‘Cold War mindset’,” Ma Zhaoxu, the foreign ministry spokesman, said.

“The commission should stop releasing such kind of reports and instead do something that will benefit the China-US relations.”

The US report was published after President Barack Obama embarked on a three-day trip to China, meeting the country’s leaders.

In an attempt to forge closer ties with the country, analysts believe Obama went into the meetings with a weaker hand than most past US presidents, with US prestige battered by the economic recession as well as the wars in Iraq and Afghanistan.

The commission also criticised China on its trade policy, recommending that Washington press Beijing to make its yuan more flexible and to turn to the World Trade Organisation to fight what it termed “predatory trade practices”.

Shortly after the release of the report, two politicians called for an investigation into China’s “currency manipulation,” which would set the stage for imposing import duties on Chinese goods. 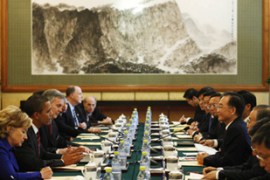