Britain dropped its bid to to get Tony Blair, the former UK prime minister, appointed to the presidency earlier in the day after it became clear that centre-right countries, who dominate the EU, were determined that the role should go to someone from their group.

“When it became clear that because of the various political considerations and varying views among the rest of the members, then the prime minister made the forceful step of proposing Catherine Ashton for the high representative’s position,” a spokesman for Gordon Brown, the British prime minister, said.

Thursday’s debate over the appointments had focused over what role the president of the European Council should play, with many arguing that the role should go to a technocrat who can build unity and consensus.

The Lisbon Treaty which created the new post was vague on its powers and obligations, saying simply that the president should “drive forward” the EU’s work.

“The Lisbon Treaty wanted to instill greater continuity and coherence into the European Council of Heads of State and Government,” Van Rompuy said.

“Six-monthly [rotating] presidencies had the advantage of involving all 27 member states in the work of the Union. The disadvantage was a lack of perspective, it is my firm intention to ensure that our work develops over a long-term period.”

Van Rompuy will serve a two-and-a-half year term, which is renewable once.

Glyn Ford, a former Labour member of the European parliament, told Al Jazeera that building a political presence in Europe was one of the challenges a new president would face.

“Now how do you develop that political presence?”

Van Rompuy told the news conference that he recognised that Europe faced sizeable challenges, including the financial crisis and climate change, and emphasised his credentials as a consensus-builder.

“As I am concerned every nation should emerge victorious from negotiations. A negotiation that ends with a defeated party is never a good negotiation,” he said

“As president-elect of the council I will listen carefully to everyone and I will ensure that our deliberations turn into results for everyone.”

Marco Incerti, a research fellow at the Centre for European Policy Studies, told Al Jazeera that the appointments marked a missed opportunity for the European Union.

“Because it had been known for some time that Mr Van Rompuy would be appointed as president of the European Council people were hoping that for the foreign minister job we would get somebody a bit better known,” he said.

“There is nothing wrong with Catherine Ashton herself, but she lacks international experience.

“For a post like that of foreign minister of the European Union having been in a comparable job for some time, having built networks … could have been useful.

“I think there were many names on the shortlist that fitted the job description a bit better and I am afraid that this is one more case in which horse-trading has prevailed. It was matter of giving the position to a Socialist in turn of the president of the council to the centre-right.”

Ashton, who has a reputation as an effective negotiator in Brussels, revealed her surprise at being appointed when she told the news conference that she had no prepared speech, but also asked people to wait to see how she performs.

“Judge me on what I do and I think you will be pleased and proud of me,” she said.

Leila Talani, a lecturer on European politics at King’s College London, said that the appointments showed the power of the European Union’s big nations.

“I would consider it [the UK] one of the winners of these negotiations as they have got perhaps the most important position with the foreign minister.” 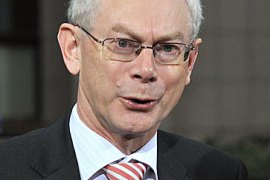 Blog: The shark or the mackerel?

Leaders from across Europe will chose the first ever EU president.