Parliament must now reopen debate on the proposed law, passed earlier this morning, meaning that there could be a delay to the election.

The country’s presidential council, comprising Jalal Talabani, the president, and two vice-presidents, had already demanded a greater say in the election for minorities and nationals living abroad.

Qasim Al Aboodi, a spokesman for the electoral commission, said he was surprised at al-Hashemi’s decision and said the whole process is now up in the air.

“Now we have no exact day of election. It’s a very difficult situation,” he told Al Jazeera.

“I didn’t expect [the veto], because I talked to the vice-president the day before yesterday for two hours and tried to explain how the vote of the people outside Iraq would affect the result of the election.

“I tried to convince him to give up a veto against the law, and he promised to, if we found a solution to the problem.

“Yesterday we suggested a proposal to solve the problem by making them one constituency [which] would make their votes exactly equal to Iraqis who are inside Iraq.”

Mosab Jasim, Al Jazeera’s Iraq producer, said: “This means we are back to square one. MPs will have to discuss the law again and make amendments requested by the vice-president; vote on them, then send them off to the ratification council.

“Al-Hashemi is in a very serious position, because if elections are delayed, he will be blamed for delaying them.”

Kurdish political leaders on Tuesday had similar concerns about the election law and have threatened to boycott national elections unless Kurdish areas received more seats in parliament.

Ala Talabani, an Iraqi MP with the Kurdish PUK party, said that the vice president’s veto was not surprising, but will mean “days of tough discussions” ahead for members of parliament.

“If we could pass this law and vote again within the coming days there will be a possibility to have the election at least before the end of January, because that is the constitutional date for having the election in Iraq,” she told Al Jazeera.

“Otherwise if we continue having discussions and arguments and we can’t vote again, there are many people who think the election will be postponed two months.”

The office of Masoud Barzani, the Kurdistan regional president, said the way seats were distributed after the passage of the law was unfair to Kurds.

“Unless this seat allocation formula is reconsidered in a just manner, the people of [the] Kurdistan region will be compelled to boycott the election,” a statement posted on Barzani’s website said.

Iraqi legislators had celebrated the passage of the key election law on November 8, needed to carry out the national polls.

But the Kurdish demands coupled with the Sunni vice-president’s veto could derail the vote.

The Kurds had originally voted in favour of the law when it was passed in parliament, but they say it was only over the weekend that they found out their provinces had received fewer seats than they believe they deserved.

Parliament was expanded from 275 to 323 seats to reflect population growth, but only three of the new seats were allocated to Kurdish provinces, giving them 38 total, according to the Independent High Electoral Commission’s website.

Other regions saw much larger growth. For example, Ninevah province which borders the Kurdish region, grew from 19 seats to 31. Basra province in the south grew from 16 seats to 24.

Mahmoud Othman, a Kurdish member of Iraq’s national parliament, said the Kurds had been expecting about 17 additional seats.

Three northern provinces make up the Kurdish autonomous region, and are represented by their own parliament and president.

The US has tied its withdrawal of all combat troops to the national vote and US military officials have said they will begin to draw down forces about 60 days after the election, hoping for assurances by then that Iraq is on stable footing.

Under a plan by Barack Obama, the US president, all US combat personnel must be out of Iraq by the end of August 2010. The rest of the troops, such as trainers and support personnel, must leave by the end of 2011. 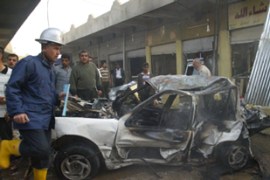 Many die in string of Iraq attacks

Members of tribe that fought al-Qaeda among latest victims of violence in Iraqi cities.

Disagreements over Kirkuk are resolved, clearing the way for elections in January.