Cadbury has already dismissed Kraft’s bid, announced on November 9 and worth $16.4bn, or about 726 pence per share, as “derisory”.

Industry experts saw Kraft’s hostile offer, which did not increase an earlier friendly bid also rejected by Cadbury management, as a bet that no competing offers would emerge.

Shares in Cadbury rallied 1.21 per cent on Wednesday to close at 797.50 pence in London.

The Wall Street Journal reported on Tuesday that Hershey and Ferrero executives have been in talks for several weeks and that Hershey is aggressive about pursuing a deal.

Ferrero is a privately held company with $9bn in sales last year, while Hershey earned $5.13bn in its most recent full year.

Many analysts have doubted Hershey could finance a higher bid than Kraft’s on its own.

Teaming up with Ferrero could give the US company the financial firepower to get into the bidding, which some had doubted it would be big enough to do.

Hershey had $119 million in cash on its balance sheet as of October 4 and $1.5bn in long-term debt.

However, a co-operative bid raises issues of its own.

Jeremy Batstone-Carr, analyst at Charles Stanley & Co, said: “Significant questions remain regarding how any deal might be put together, not least in terms of product and/or geographical segmentation.

“Whilst aware that seldom does smoke exist without fire, the likely complexities associated with a rival approach for Cadbury in purely practical terms leave us strongly of the view that Kraft remains the strongest rival but that it will need to increase its offer in order to win control.”

Analysts at Evolution Securities say a deal with Kraft would likely be struck at a price of at least 850 pence, well above the current bid.

Hershey has a long-standing license to sell some Cadbury products, including Cadbury and Caramello chocolate brands in the US, and York peppermint patties and Almond Joy worldwide.

Those deals could be threatened by a Kraft acquisition.

Hershey has sought to expand its international portfolio over the past three years through joint ventures in Brazil, China and India.

About 85 to 90 per cent of Hershey’s sales are in the relatively slow-growth market of North America. 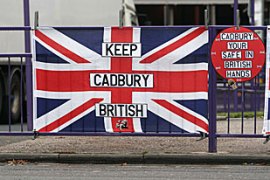 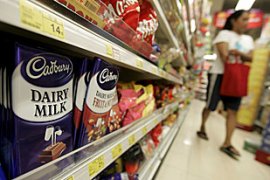 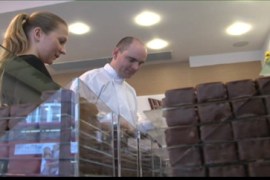 Cadbury Schweppes, Britain’s best-known confectionery company, plans to slash 5500 jobs and shutter one fifth of its 133 factories in a bid to cut costs by $677 million by 2007.