Palestinian farmers in the West Bank, or “water pirates” as Israeli occupation forces prefer to call them, are siphoning off drinking water pipes in an effort to secure water to irrigate their farmland.

Water is an increasingly disputed resource between Israel and the Palestinians.

A World Bank report has accused Israel of using four times more water than Palestinians from the so-called Mountain Aquifer that bridges Israel and the territory and runs along the West Bank.

Israel disputes that claim and says the Palestinians are jeopardising the resource through illegal use.

Palestinians argue they are being denied access in order to force them off their land.

Badran Jaber, a Palestinian farmer, told Al Jazeera: “We were surprised by a large group of soldiers and settlers who surrounded the entire area. We asked them: ‘why are you doing this and what do you want?’ They refused to speak to us.

“Men who came with the soldiers stormed the field and pulled out all the irrigation pipes, destroying the crops.”

Al Jazeera’s Jacky Rowland reports on how Israeli rules blight the lives of many Palestinians.

Nader al-Khateeb, the director of Friends of the Earth in the Middle East, told Al Jazeera: “We are under occupation and everything is restricted by Israeli procedures.

“This policy is not a new policy, there are lots of examples of Israel trying to force Palestinians to leave their land so settlements can expand easily.

“This is an organised Israeli policy designed to prevent the development of the Palestinian economy – knowing that agriculture is a major sector within the economy.”

Israel’s daily water consumption per capita is four times higher than the 70 litre per person consumed in the West Bank and the Gaza Strip, according to the report entitled: Troubled waters – Palestinians denied fair access to water.

Israel’s water authority called the report “biased and incorrect, at the very least” and said that while there is a water gap, it is not nearly as big as presented by Amnesty.

The Amnesty report said Israel uses more than 80 per cent of water drawn from the aquifer and while Israel has other water sources, the aquifer is the West Bank’s only supply of water.

In the Gaza Strip, several repair works were under way to improve sanitation before the Israeli blockade was imposed in 2007.

But the projects have been on hold under the siege, as Israel is preventing repair materials from coming into the Strip.

Amnesty said between 180,000 and 200,000 Palestinians in West Bank rural communities have no access to running water, while taps in other areas often run dry.

“Israel allows the Palestinians access to only a fraction of the shared water resources, which lie mostly in the occupied West Bank”, Donatella Rovera, an Amnesty researcher, said. 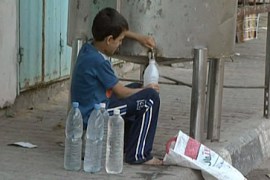 Outdated pipelines are polluting the water and making Palestinians in Gaza ill. 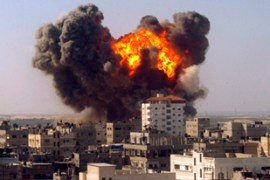 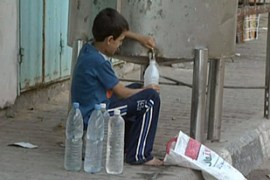