A transcript of the session was posted on the website of the state-run Xinhua news agency and it was broadcast on local Shanghai television with a several-second delay.

Obama sought to warm relations between the two powers, saying that good ties between Beijing and Washington could lead to a more peaceful and prosperous world.

“The notion that we must be adversaries is not predestined,” he said.

Al Jazeera’s Melissa Chan, reporting from Beijing, said that Obama made references to the US constitution and its emphasis on equality.

“He emphasised that the United States guarantees equality under the law for all people, and equal rights for ethnic and religious minorities,” she reported.

“He seemed to be making references to the issue of Tibet and the Uighurs, but did not mention them by name.”

But Obama’s two-day visit to Beijing, where he will be hosted by Hu Jintao, the president, is expected to be dominated by economic considerations.

The US president is likely to press Beijing to allow its currency to appreciate, a move aimed at redressing a widening trade imbalance.

The yuan has been pegged to the dollar since July 2008 when the global economic crisis hit export markets for Chinese-made goods.

But Patrick Chovanec, an economics professor at Tsinghua University said that the currency issue was a “red herring”.

“I think it’s a big distraction from some of the more substantial issues that he should be talking about,” he told Al Jazeera from Beijing.

Chovanec said the US faced a very similar situation with Japan in the 1980s, with chronic trade surplus and Japan accumulating currency reserves, and that doubling the yen’s value actually increased the trade surplus.

“If Obama wants to achieve real results, he should be pressing the Chinese on market-oriented reforms that open the Chinese market and help unlock savings in China rather than pressing them on the currency itself,” he said.

Obama is expected to have to answer Chinese questions about US tariffs on Chinese tyres and preliminary duties on some steel products, moves Beijing has labelled as protectionist.

Chinese leaders are also likely to seek assurances about how spending policies will affect the already soaring US deficit and the safety of Chinese investments.

Yeliang Xia, an economics professor at Peking University, said Beijing would use such issues as a bargaining chip.

“Washington should have a flexible attitude toward Chinese exports to discourage protectionist actions against China,” he told Al Jazeera.

“So in that way China would do more to balance the trade deficits and also would appreciate the yuan’s value in a more active way.”

He said China needed the business from exports to support not only domestic consumption but also to support the industries because the manufacturing sector is very important to the country.

Meanwhile, environmental activists are also hoping that Obama and Hu, whose countries are the world’s top two emitters of greenhouse gases, will reach some kind of climate change deal before global talks in Copenhagen next month.

Obama will also meet Wen Jiabao, the Chinese premier, and other officials. 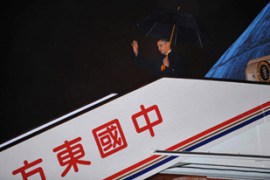 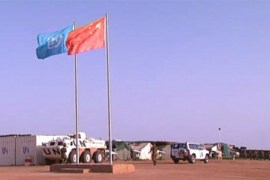