The data was found after Nasa crashed two spacecrafts into the lunar surface last month in a dramatic experiment to probe Earth’s nearest neighbour for water.

“In the 20- to 30-metre crater we found maybe about a dozen, at least, two-gallon buckets of water,” Colaprete said.

“Multiple lines of evidence show water was present in both the high angle vapour plume and the ejecta curtain created by the LCROSS Centaur impact.

“Along with the water in [the] Cabeus [crater], there are hints of other intriguing substances,” he said.

Having an abundance of water would make it easier to set up a base camp for astronauts, supplying drinking water and a key ingredient for rocket fuel.

But an insufficient budget has meant that Nasa’s plans to put US astronauts back on the Moon by 2020 are increasingly in doubt.

A key review panel appointed by Barack Obama, the US president, said existing budgets are not large enough to fund a return mission before 2020. 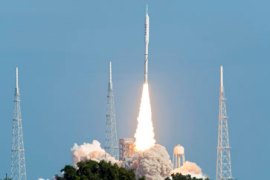 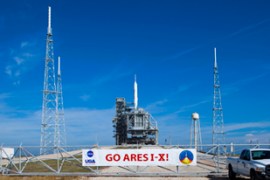 Poor weather prevents test of first step towards returning people to the moon. 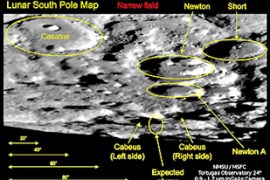 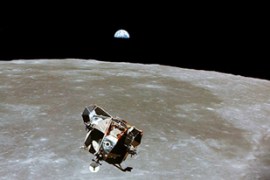 Probes confirm water on the moon

Clear evidence found after examination of data from Indian lunar probe and other missions.