“Up to 300kg of high explosives and mortars were packed into the car bomb,” Malik Naveed, the North West Frontier Province police chief, said.

Separately, at least six people were killed in a bombing at the Bakakhel police station in the town of Bannu, in Pakistan’s North West Frontier province (NWFP), police said.

Bannu is close to the tribal region of North Waziristan, a Taliban stronghold.

The latest attacks come one day after 17 Pakistani soldiers were killed in fighting in South Waziristan.

Pakistan has been on heightened alert since mid-October when government forces launched an offensive against Pakistani-Taliban fighters in the country’s semi-autonomous tribal region of South Waziristan.

In the Peshawar attack, Liaqat Ali Khan, the city police chief, said a car bomber attacked the main gate of the complex, triggering a blast so powerful that most of the building had collapsed.

“It was the biggest explosion I’ve ever heard,” Asad Ali, a witness, said.

Al Jazeera’s Kamal Hyder, reporting from Islamabad, said other Peshawar residents had reported a massive explosion that was heard across the city.

He said the explosion happened at about 06:40am local time (01:40 GMT), when not many people were on the streets except for children on their way to school.

Citing local witnesses, Hyder said the explosion was powerful caused heavy damage to a large number of houses and structures nearby.

He said many other victims were feared to have been buried under the rubble of the collapsed building.

Hyder said that the attack would have had to have been carefully planned because the intelligence agency office is located in a high security area of the city, close to top military and government offices.

Soldiers had opened fire on the bomber’s vehicle but were unable to stop it before it hit a steel barrier near the entrance to the compound, Mian Iftikhar Hussain, the provincial information minister, said.

“This is a guerrilla war,” he said.

“We will continue our action against these militant terrorists. That is the only way we can survive.”

The blast, the fourth in or around Peshawar in as many days, comes as Pakistan presses ahead with a military offensive against the Taliban, most recently in South Waziristan.

The attacks appear to be aimed at weakening the government’s resolve to continue its military operation in South Waziristan, their main bastion, on the Afghan border.

Last month, a huge car bomb ripped through a crowded grocery market in the centre of Peshawar, killing more than 100 people, mainly women and children. 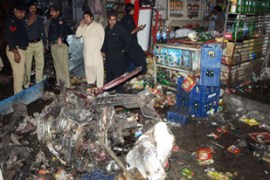 At least 30 people killed in third attack in three days in and around Peshawar. 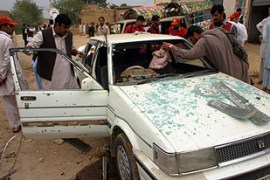 Three people, including police constable, are killed in blast in Peshawar. 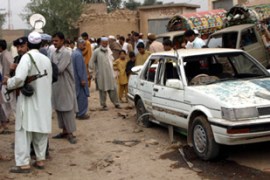 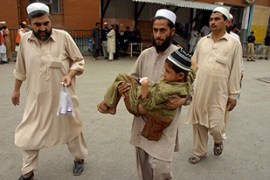 Taliban ally-turned-enemy among victims of suicide attack near Peshawar in the northwest.