Thailand and Cambodia have an extradition treaty, but a get out clause allows either country to turn down a request if they believe it is politically motivated.

Thaksin’s appointment as a Cambodian adviser has outraged Thailand’s government and strained already tense relations between Phnom Penh and Bangkok.

“Thaksin is a criminal fugitive and we asked the Cambodian government to send him back,” Suthep Thaugsuban, Thailand’s deputy prime minister, told reporters in Bangkok.

Both countries have recalled their ambassadors, and on Tuesday the Thai government announced it was cancelling an oil and gas exploration deal agreed with Cambodia when Thaksin was prime minister.

Thaksin’s arrival in Cambodia also comes as the Thai government accused the former prime minister him of insulting the country’s monarchy.

In an interview with a British newspaper he was quoted as calling for the reform of the Thai monarchy.

Speaking to The Times, Thaksin spoke of the prospects for Thailand’s Crown Prince Vajiralongkorn, once he succeeds his 81-year-old father, King Bhumibol Adulyadej, who has been in hospital for almost two months with a lung ailment.

In the interview he repeatedly praised the king but said the circle of people around him had illegitimately interfered in politics.

“Thailand needs to have a monarchy but it should not be abused or played by the palace circles,” he was quoted as saying.

Thaksin later said in a statement that the newspaper article had misrepresented his words, saying “the untrue report caused a misunderstanding among readers and Thais”.

According to analysts, the former prime minister’s arrival could also give momentum to supporters over the border in Thailand, giving Thaksin a nearby base from which to organise his campaign to force new elections and return home.

Thaksin has been in self-imposed exile since being ousted by the military in a 2006 coup.

He returned to Thailand briefly last year but fled before being found guilty and was sentenced in absentia to two years in jail for corruption.

Despite his exile, he remains at the centre of a bitter political fight between his supporters and those of the current government.

It is not clear how long Thaksin will remain in Cambodia, but he is scheduled to give a lecture on Thursday to 300 economists at the country’s ministry of finance.

Khieu Kanharith, the Cambodian information minister and government spokesman, said Cambodia was “looking forward to learning from Thaksin’s great economic experience and we are convinced that his experience will contribute to our country’s economic development”. 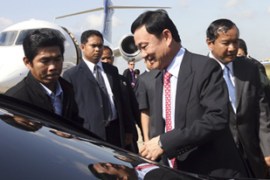 Thaksin flies in to Cambodia storm