“We sent him to the court yesterday and he was charged with releasing information related to the national security of Cambodia,” he said.

The expulsions resulted in Thailand and Cambodia recalling their ambassadors from each other’s capitals.

“We expelled the diplomat first, and they responded by asking our first secretary to leave their country within the next 48 hours,” Koy Kuong, Cambodia’s foreign affairs ministry spokesman told AFP.

“The Thai diplomat has executed work in contradiction to his position.”

Hun Sen, the Cambodian prime minister, further angered Bangkok on Wednesday by refusing a request for the extradition of Thaksin to serve a two-year prison sentence handed down in September 2008.

Thaksin arrived in Cambodia on Tuesday at the invitation of Hun Sen, who had appointed him as an economic adviser.

He has been in self-imposed exile since being ousted by the military in a 2006 coup. The former prime minister returned to Thailand briefly last year but fled before being found guilty and was sentenced in absentia to two years in jail for corruption.

Thailand and Cambodia have an extradition treaty, but a get out clause allows either country to turn down a request if they believe it is politically motivated.

As tensions rise, the Thai government announced on Tuesday it was cancelling an oil and gas exploration deal agreed with Cambodia when Thaksin was prime minister.

On Thursday, Abhisit Vejjajiva, the Thai prime minister, ordered a review of two road construction projects with Cambodia which involved loans of more than $42 million to Phnom Penh, the Thai finance ministry said.

Abhisit also said he was considering further measures but vowed that his government would not seal off checkpoints on the border and said that the rift with Cambodia would not lead to violence.

“I don’t want the situation going out of control,” he told reporters in Bangkok.

Twice-elected Thaksin fled Thailand in August 2008, a month before his jail sentence was announced. He had returned to Thailand just months earlier for the first time since the coup.

But he has retained huge influence in Thailand by stirring up protests against the current government, and analysts say that in his new position in Cambodia, he has found a new way of pushing his campaign for a return to power. 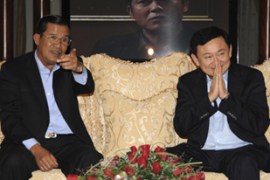