He walked past the soldiers and the band towards the outstretched hand in front of him.

It was the usual protocol, but it carried the symbolism of movement – the hint of the beginning of momentum.

Bashar al-Assad was welcomed at the Elysee Palace in Paris like an old friend.  He’s been president of Syria for a while now but still looks slightly awkward with the trappings of office.

He may have been here for lunch, but this was all about the business of pushing peace in the Middle East. And at the top of the agenda, the possibility of fresh talks between Syria and Israel.

Under Jacques Chirac, the French and the Syrians didn’t get on. Under Nicolas Sarkozy that’s all changed.

Rami Khouri, a political analyst in Beruit, knows why the French see their relationship with Damascus as important and significant.

“Syria is important because it is the most centrally located and politically engaged player in the entire region.  It has ties with every single important actor in the region and that’s why Syria is important,” he said.

His meeting with the French was described as frank – diplomatic shorthand for angry.

The biggest areas of contention: Israel’s refusal to stop settlement building in the West Bank and Jerusalem, and the French support of the Goldstone Report into the Gaza War.

Yet for all the angry words, when he departed the prime minister let it be known he was willing to talk to Syria. Anytime, anywhere with no preconditions.

He left a letter. And in the elegant dining room of the Elysee, that was passed to president Assad.

The Syrians and the Israelis were involved in talks last year but they came to a sudden halt when the Israelis launched their offensive in Gaza. The Turks were the mediators and are ready to play the same role again with French support.

Key to any deal is the future of the Golan Heights. Seized by the Israelis in 1967, unilaterally annexed in 1981, Syria wants them back. It boils down to this – no return, no deal.

The Syrian president said as much when he emerged from the Elysee Palace.

He talked about talks with no preconditions but insisted Syria had rights which had to be respected.  And he challenged the Israelis that if they were serious about discussions, then they should dispatch their team of negotiators to Turkey and he would do the same, and maybe a deal could be reached.

When asked what role the French would play in any talks, he answered: “Whatever role they want.”

He feels a “climate of comfort” has built up between Paris and Damascus and he’s happy to develop that.

The reason the French have taken such a prime role is the lack of action from the Americans.

One political analyst says the French have stepped in because no one else can at the moment.

Patrice De Beer, a seasoned journalist and a keen watcher of political developments told me that France will get the talks started, but it will need both countries to be committed to the the process if it’s to be a success.

What is important is the next step, and then the one after that.

With talks with the Palestinians stalled, Israel is looking to make a deal with Syria.

What happened in Paris is a small step. Any deal is still a long way off.

The French, the Americans and the others will be hoping that if this part of the process starts to move, it might produce movement elsewhere.

It seems like a long shot, but in the absence of any concrete moves elsewhere, it’s the only one there is.

Al-Assad says he will not meet Netanyahu, but called for Turkish mediation. 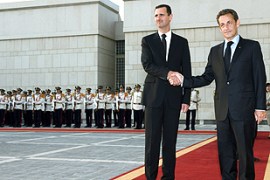