“We demand the cancellation of the results that were just announced and we insist on a new vote,” Ussufo Momade, the Renamo secretary-general, was quoted as saying on Thursday.

Renamo has alleged ballot-stuffing in some districts and that its observers had been expelled from others.

The breakaway Democratic Movement of Mozambique, which came in third in the October 28 poll, also protested saying ballots had been tampered with at some polling stations.

Voter turnout nationwide was 45 per cent, but some stations reported a turnout of 95 per cent or more, raising suspicion of possible ballot stuffing.

The vote was Mozambique’s fourth national election since a 16-year civil war between Renamo and the Frelimo government ended in the establishment of multi-party democracy in 1994. 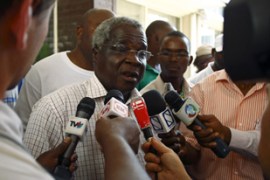